byDefend The Heroes
in Exclusive 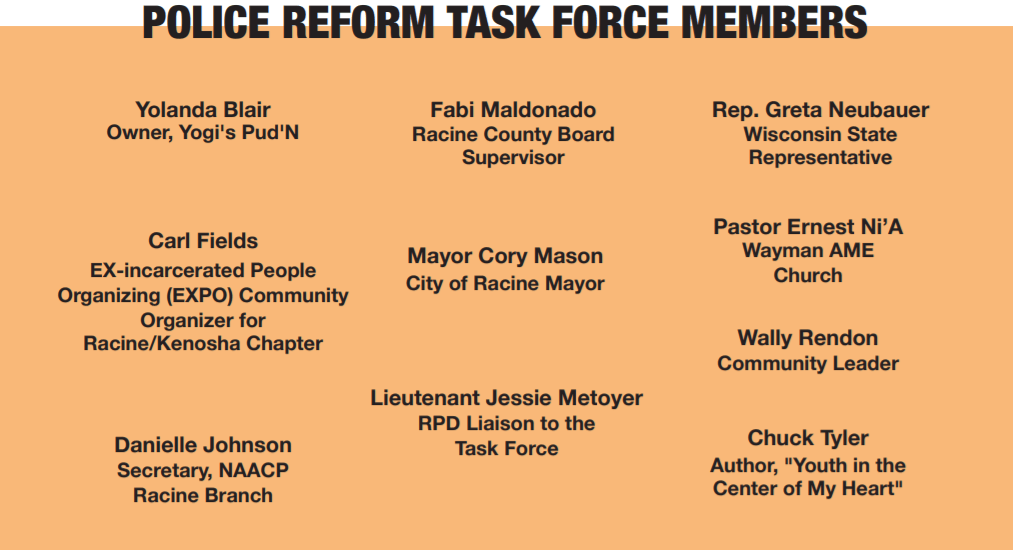 Yesterday we reported on a “Police Reform” Report from the Racine (WI) Police Department. It’s insane at best. And you probably can’t imagine the worst of it.

And if you are thinking that a politically charged report listing asinine recommendations like denying military veterans police jobs “due to a possible militaristic approach,” sounds insane, you’re right. And it’s  just the tip of the proverbial “woke” iceberg in the politically styled “report.”

First, one of the most glaring errors in the report was the sheer lack of specifics about crime in Racine. Sure, it waxes on an on about George Floyd and “white supremacy” and “systemic racism.” But nothing in the report substantiates any of that dribble to the urgent need for reforming the Racine Police Department.

Kicking Officers When They’re Already Down

Even worse, suggesting the idea that “reform” is necessary in Racine is much like kicking officers when they’re already down. A survey taken by the officers in 2018 revealed that police morale was “absolutely horrible.” Those aren’t our words. That was the headline from the media in that area at the time.

Sounding the Alarm for Officers Around the Nation

But this “report” has implications far beyond Racine. It reads like a woke-minded manifesto for cowardly leaders who are blind to crime and criminal behavior in their communities.

And it should sound an alarm to not only Racine but officers across the country. It is absolutely terrifying that politicians could use a fancy-looking report to demand police reforms with little more than anecdotes, cute word clouds—and not a shred of actual real crime data to substantiate any of it. Sorry, all too convenient surveys handled by so-called “consultants” don’t really count in the real world.

Police Reform: Brought to You By Friendly Neighborhood Ex-Cons…

But much like letting the fox into the hen house, far too many politicians are all too eager to let ex-cons run the police reform show.

In Racine, Carl Fields was one of ten panel members listed as a “police reform task force member.” What are his qualifications you may ask?

His title in the report is “EX-incarcerated People Organizing (EXPO) Community Organizer for Racine/Kenosha Chapter.” And according to court records, he plead guilty to a Class D Felony: 1st-Degree Recklessly Endangering Safety Use Dangerous Weapon (Felony > 5 Yrs).

Ex-cons Who Have Shot at Police Officers

Don’t get us wrong, we are all about rehabilitation. And we all about giving anyone a chance—so long as they prove to be a valuable, contributing member to society.

However, Fields was convicted and plead guilty to shooting at Racine Police Officers.

You can read about that incident and his standoff with SWAT here. Prosecutors said at the time that “Fields is not a new name to police.” They happen to be referring to accusations that “132.26 grams of crack cocaine inside his personal belongings” were found.

Redemption is one thing. Reform is another. And ridiculously insulting law enforcement professionals by having them follow guidance from an ex-con—who previously shot at police officers—should seem irrational and disrespectful to just about anybody with a brain and a pulse.

So one has to question the rational here: is this an actual attempt at police reform, a political cover up for failed policies, a social-psychology experiment—or a practical joke?

Help Defend the Racine PD and the City of Racine

We will be covering this story more. But right now, we need your help.

Law Officer is supporting Defend The Heroes, a non-profit organization and one of our partner.
And to help #DefendRacinePD, we have provided funds for a research report to expose this nonsensical “police reform” initiative for what it is.

Donate to Help the Racine PD

The officers of Racine need help. And the citizens of Racine need a police department that can fight crime and promote public safety. Despite the fancy “expected outcomes” in the report, the real-world results are likely going to prove much different—and not in a good way.

The 2020 data and accompanying crime totals will be horrific and we will report on them.

And that was not because of law enforcement. So while Racine Police Chief Art Howell is getting behind this reform document with questionable individuals behind involved, it makes any sane person wonder why his city is getting worse.

And we haven’t even mentioned the crime rate in Racine—which will shock just about anybody.

Do you see the bait and switch here?

Let’s blame the cops so we don’t have to take responsibility for the real bad things that are occurring.

Well, we will not let that stand and we will hold those responsible for creating this environment accountable.
Unfortunately, the leaders in Racine don’t seem eager to do the same.

Please help Defend The Heroes stand up for the Racine Police Department by donating here. Help us #DefendRacinePD

Defend The Heroes is a non-profit organization that helps defend law enforcement professionals and agencies from defamation, and the demands of so-called social “justice.” Law Officer is a proud partner of this important organization.  Find out how you can help at: www.defendheroes.org
Share—and speak up for law & order...
Tags: police reformracinewisconsin