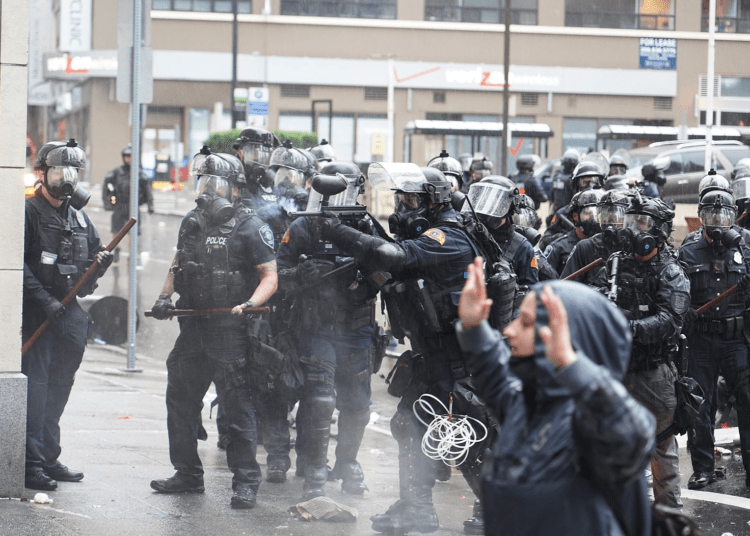 OAKLAND, Calif. – Alameda County has agreed to ban rubber projectiles, bean bags and less-lethal munitions for crowd control during civil unrest as part of a settlement after sheriff’s deputies deployed these items, which injured two people during confrontations in 2020, plaintiffs attorneys said Thursday.

Officers of the Oakland Police Department and deputies with the Alameda County sheriff’s Office used pepper spray and rubber projectiles to disperse demonstrators in Oakland during a June 1, 2020 protest. Plaintiffs attorney said law enforcement personnel used less-lethal options “indiscriminately,” which led to injuries suffered by Tosh Sears and Kierra Brown, according to a federal lawsuit against Alameda County and the city of Oakland, CBS News reported.

Sears and Brown joined thousands of others engaging in protests and riots in the streets of Oakland following the death of George Floyd in Minneapolis. Sears sustained a hip injury and Brown was injured in the calf.

The city of Oakland has had a policy banning the use of rubber projectiles and bean bag munitions for crowd control since 2003 unless there was an “immediate danger of death or great bodily injury.”

But the Oakland Police Department was joined by the allowed Alameda County Sheriff’s Office in trying to maintain order during the civil unrest. According to plaintiffs attorney, Rachel Laderman, it was deputies who deployed the less-lethal munitions that caused harm.

“Alameda County Sheriff was really the main actor in terms of using impact munitions in an indiscriminate manner, shooting willy nilly into the crowd,” Laderman said.

As a result, the settlement restricts the sheriff’s department’s use of impact munitions and flashbangs to situations where it’s necessary to defend against the threat to life or serious bodily injury or to bring a dangerous and unlawful situation under control, the lawyer said.

Attorneys for Alameda County and the city of Oakland did not immediately respond to CBS emails soliciting a comment.