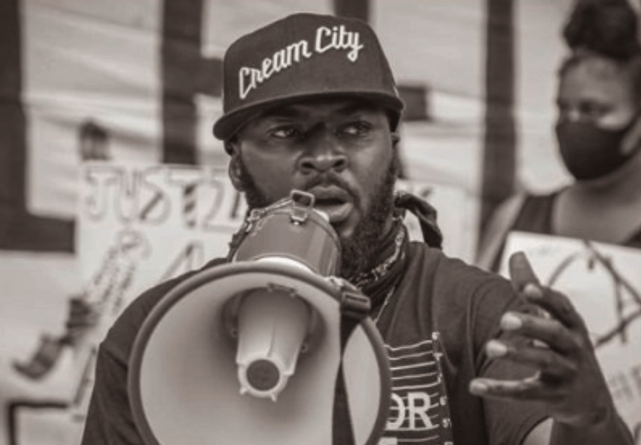 Coleman, who has Gangster Disciples gang ties, was a key organizer of Milwaukee’s most controversial Black Lives Matter protests/riots and involvement in the Milwaukee police chief Alfonzo Morales’s demotion.

Coleman was found not guilty of the lesser charge of Unlawful Transaction with a Minor.

Coleman faces 10 to 20 years in prison for the robbery conviction. The jury has recommended 10 years. The judge will make the final sentencing decision at a later date.

FEATURE 🚨: The lives of three leaders of Milwaukee’s new protest movement have prepared them for this battle for equity and racial justice.https://t.co/ITqAvPsVNu

Coleman was on trial for robbery and unlawful transaction with a minor, both felonies.

In an exclusive interview with Kenton County Commonwealth Attorney, Rob Sanders after the trial, Sanders told WRN that he believes the verdict was correct based on overwhelming proof that Coleman planned and participated in the armed home invasion robbery.

Sanders confirmed the jury recommended a 10 years sentence for Coleman. If the judge sentences him to 10 years, Coleman will serve a minimum of 8.5 years in prison before being eligible for early based on an 85% sentencing guideline for violent crime convictions.

Sander said the juvenile, Johnny Hubbard, who participated with Coleman in the robbery, was only months away from his 18th birthday and that the jury was not convinced Coleman knew he was a juvenile.

Hubbard pleaded guilty to robbery and received a 10-year sentence in adult court. Hubbard testified against Coleman in the trial in exchange for a plea deal.

Coleman’s co-defendant Joshua Clarey, 24, of New Berlin pleaded guilty to 2nd-degree robbery and Unlawful Transaction with a Minor. He will receive a 15 years sentence in prison. He will be eligible for early release after serving 3 years in prison due to a 20% sentencing guideline for non-violent crime convictions. Clarey refused to testify against Coleman.

Coleman was out of jail pending trial on a $10,000 cash bond. After the guilty verdict, his bond was revoked and he is now being held in the Kenton County Detention Center pending formal, final sentencing.

Sanders credited the Elsmere Police Department for doing an excellent job investigating the case and members of the community who called the police and came forward with information.

#BLM leader Khalil Coleman, who has now been convicted of first-degree robbery for trying to rob a drug house in Kentucky with a minor, was a supporter of Gaige Grosskreutz, the gunman shot in the arm by Kyle Rittenhouse in Kenosha. https://t.co/RsVO91DMJr

Coleman was accused of pressuring a juvenile to rob what they believed was a drug house, handing him a gun and telling him to “go get that money,” according to court documents obtained exclusively by Wisconsin Right Now.

The complaint in Kentucky alleges he gave a Glock handgun to the juvenile and told him to commit the robbery.

The juvenile suspect “felt pressured to commit the robbery and pointed a loaded Glock pistol at the victim and stated, ‘We got business to talk about and to get in the house,’” the citation reads.

But it didn’t work. “The victim ran inside, shut the door and held it shut while calling 911,” says the citation. The citation against Coleman’s co-defendant Joshua Clarey, 24, of New Berlin, describes the same allegations but adds an accusation that Clarey “was sitting in the front passenger seat of a vehicle that was stopped for matching the description by the victim…firearms were located in vehicle. Above was the right front passenger and along his seat (police) located a small plastic baggy. Inside was an off-white material believed to be heroin.”

Coleman had entered a not guilty plea.

Elsmere Police Detective Eric Higgins told Wisconsin Right Now in an interview that police believe Coleman and his co-defendants were attempting to rob a drug house in the February 15, 2021, incident.

“They went to the wrong house,” he said. Police are still trying to determine the original target, which would give them more information on motive, but he said that Coleman and Clarey aren’t talking to the police.

According to Higgins, the juvenile involved in the Kentucky incident is a 17-year-old white male from Indiana. He could not provide his name because he’s a minor. He doesn’t believe that Coleman and the juvenile are related.

During the attempted heist, Coleman “was in the driver’s seat of the car,” Higgins said.

After the first robbery attempt, “they tried coming back to do a second attempt to do robbery, and they saw a marked (police) unit and tried to flee.” He said they “made it a couple blocks” until they were blocked in by a snowplow and were captured.

“It’s lucky no one got hurt,” said Higgins, who noted that police confiscated two guns and one had a “50-round drum,” in it, “extra capacity.” Higgins found it “concerning, obviously” that a juvenile was allegedly made the triggerman. He wasn’t sure why Coleman, Clarey and the juvenile were in Elsemre or Kentucky other than to allegedly “rob a drug house.” He said Elsmere is part of the greater Cincinnati area.

He said the Gangster Disciples gang has come up in discussions he’s had with law enforcement from other states in connection with the case, but he has no evidence of direct gang ties in this incident because police don’t know the original target yet.

Coleman once wrote on LinkedIn that he’s received multiple contracts from educational and community entities to train students to reject violence.