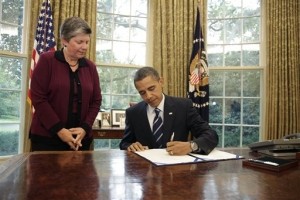 WASHINGTON – President Barack Obama on Friday signed a bill directing $600 million more to securing the U.S.-Mexico border, a modest election-year victory that underscores his failure so far to deliver an overhaul of immigration law.

The new law will pay for the hiring of 1,000 more Border Patrol agents to be deployed at critical areas, as well as more Immigration and Customs Enforcement agents. It provides for new communications equipment and greater use of unmanned surveillance drones. The Justice Department gets more money to help catch drug dealers and human traffickers.

But the bill fell short by the standards Obama has set for dealing with the immigration problem. In a speech last month Obama reiterated his commitment to a comprehensive approach that would secure the border but also address the 11 million illegal immigrants already in the country.

"Our borders are just too vast for us to be able to solve the problem only with fences and border patrols," the president said then. "It won't work."

Obama signed the bill Friday in a low-key Oval Office ceremony alongside Homeland Security Secretary Janet Napolitano. There were cameras present, but no reporters. The action came a day after the Senate convened in special session during its summer recess to pass the bill.

Napolitano said later: "This bill is clearly another step forward on border security, on top of the significant progress that the administration has already made. It is one of the many tools in the toolbox we have constructed along the border."

That wasn't good enough for some immigration advocates, who've criticized the legislation as election-year politics.

"Efforts to overhaul our broken immigration system have once again taken a back seat to appeasing anti-immigrant xenophobes, as Congress passed another dramatic escalation in border enforcement with very little evidence that past escalations have been effective," said Margaret Moran, president of the League of United Latin American Citizens.

Napolitano on Friday blamed Congress, Republicans in particular, for the failure to move forward on comprehensive legislation.

Although some moderate Republicans have in the past supported such far-reaching legislation, including a path to citizenship for illegal immigrants now in the country, most in the GOP label that approach amnesty.

"If the president takes amnesty off the table and makes a real commitment to border and interior security, he will find strong bipartisan support," Senate Minority Leader Mitch McConnell, R-Ky., said Friday.

Even past GOP backers of comprehensive immigration bills, such as Arizona Sen. John McCain and South Carolina Sen. Lindsey Graham, are no longer willing to lend their support. That's in part because of opposition from conservative primary voters.

Republicans largely backed the border security bill signed Friday even while complaining it didn't go far enough in increasing the number of customs inspectors along the border.

The border security debate has become even more heated since Arizona passed a law directing law enforcement officers to be more aggressive in seeking out illegal immigrants. Although a federal judge has since struck down some of the law's major provisions, it remains a rallying cry for those who say Washington has lost control of the border.

Law Officer is the only major law enforcement publication and website owned and operated by law enforcement. This unique facet makes Law Officer much more than just a publishing company but is a true advocate for the profession.
Tags: NewsSurvellanceTechnology Communications