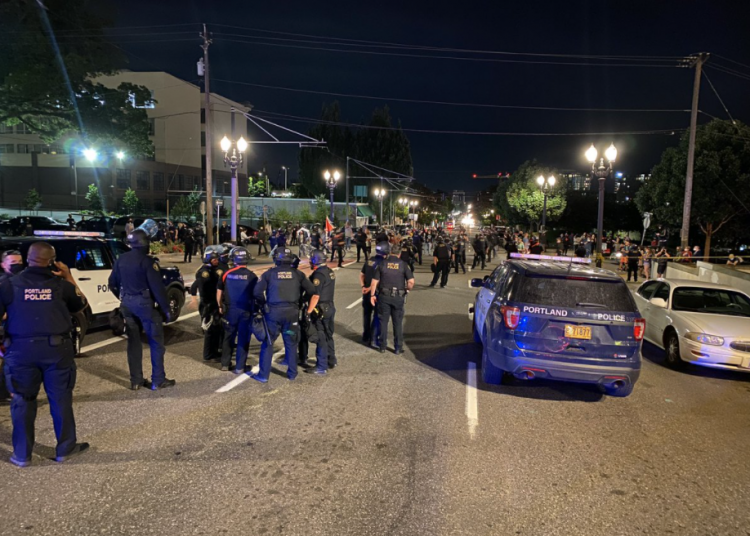 PORTLAND, Ore. — A mob gathered in Portland’s Lloyd District Thursday night to protest what they apparently thought was a fatal officer-involved shooting of a black man in the area earlier. The decedent was a white man, police said.

According to the Portland Police Bureau, some protesters became violent and threw items at officers. One agitator attempted to grab an officer’s baton while a second officer was reportedly hit with pepper spray as he tried to intervene, Fox News reported.

Apparently believing “erroneous” information was spread on social media regarding the race of the suspect fatally shot by police, the department clarified on Twitter that the person was an “adult white male.”

There is erroneous information being circulated on social media regarding in the officer involved shooting in the Lloyd district. We can confirm that the subject involved is an adult white male. No one else was injured.

A crowd has formed at the officer involved shooting scene. Some participants have thrown objects and tried to enter the closed area. An officer’s baton was grabbed by someone and when another officer intervened, the officer was sprayed with a chemical. pic.twitter.com/eHxcBXTrOg

Some protesters tried to enter the cordoned-off area where the shooting took place. It wasn’t clear if the area was still an active crime scene, or if it remained secured for other reasons. At least one officer had their tires slashed and a window broken, police said.

Chief Chuck Lovell issued a video statement via Twitter. “Our officer encountered a very difficult and dynamic situation that no officer wants to face. I want to thank all our members who responded to the scene as well as those who were out taking emergency calls in the city. I’m thankful and proud of their efforts.”

My statement from the scene of the officer involved shooting in the Lloyd District. pic.twitter.com/Qg0Cxfbl0i

He added the bureau was “committed to a full, thorough and complete investigation” of the fatal encounter.

A witness to the police-shooting told KOIN 6 the incident may have started as a fight between two men and one stabbed the other.

Officers originally responded to the motel for a welfare check on the suspect, PPB said.