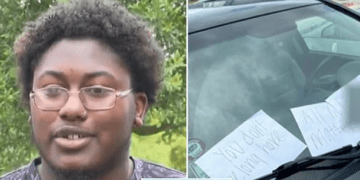 In a report released to KBTX News, police at Texas A&M University said a student who reported finding racist notes on his car’s windshield last month may have placed the papers there himself.

The 21-year-old at the center of the case strongly denies those claims.

Isaih Martin, a senior at A&M, called police on the afternoon of Wednesday, June 24, to report finding three handwritten notes on his car that said “All lives matter” and “You don’t belong here.” The third note contained the N-word.

Martin parked his car at his apartment complex on George Bush Drive just after 11:00 a.m. and walked into a nearby apartment. Roughly 90 minutes later Martin returned to his car where he claims he then found the papers. 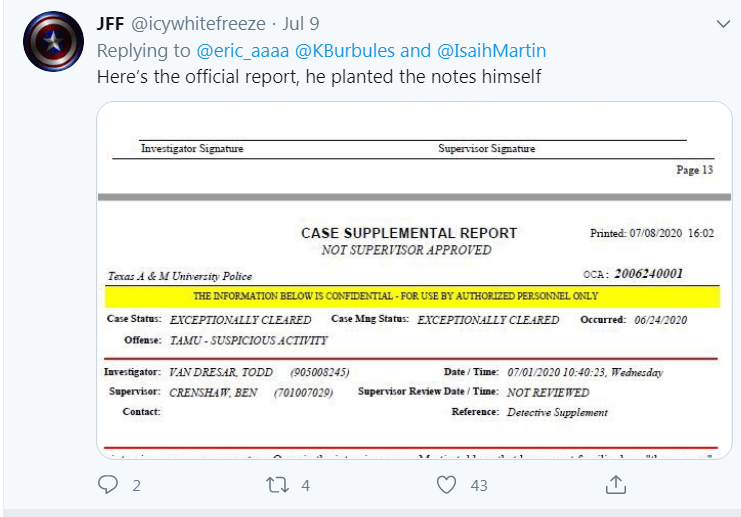 Police said in the report it was “difficult to distinguish any characteristics of the suspect in the video” but “based on video evidence, no other person had enough time to place the messages on Martin’s car other than himself.”

“He was the only person with enough time to place the notes on his car,” said police.

Martin said that he was “….utterly disappointed,”  in response to the conclusions of the police report. “There are several things they did not include in this report.”

Martin announced earlier this week that he was no longer cooperating with law enforcement.

“I’m in a predicament where the topic of the case was let’s find out who did this to them pointing the finger at me,” said Martin on Twitter. “In the end, I stopped talking to them because it seemed they were more interested in me getting the blame for this hate crime instead of finding the actual person who did it.”

The district attorney has determined that there was not a crime committed since the notes did not contain a threat.

“I was told that this fell under the 1st Amendment free speech protections and that no crime had occurred,” wrote the officer who filed the report.

According to KBTX TV, police also asked the county attorney’s office to see if the incident would be considered a false report but were told the case “does not meet the elements since Martin did not report a crime.”

The case is considered closed, according to university police.

After the incident was reported last month, A&M’s president offered a $1,200 reward for information that could lead investigators to who put the notes there.

“Racism of any kind has no place at Texas A&M. I appreciate the efforts of university police who investigated with professionalism in pursuit of facts. We will continue to take an active stance to review claims of harassment, stalking and/or related retaliation that violates a person’s civil rights, wherever it may lead. We will continue to develop a safe and welcoming environment.”