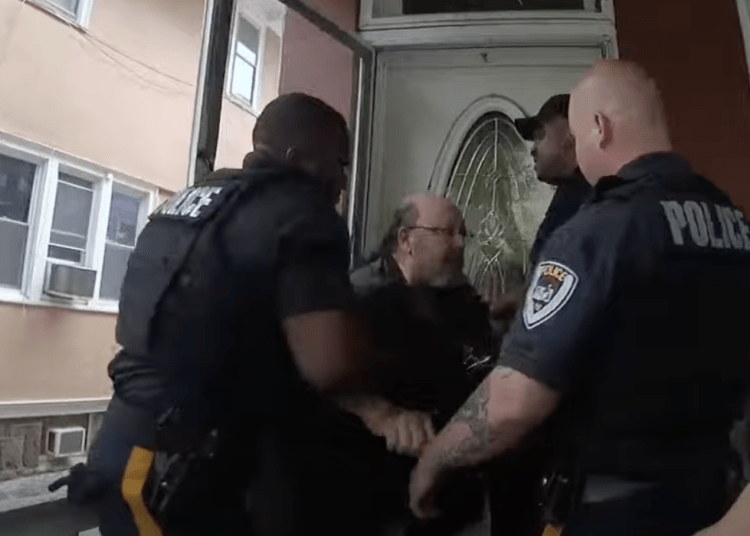 Trenton, New Jersey – A Trenton Police officer has been indicted on a criminal charge for pepper-spraying a suspect that was resisting arrest. Officers had been called to the residence for a domestic violence complaint  when they encountered Joseph Ahr Sr. at the door. Ahr refused entry to officers and an altercation ensued.

NJ.com reported that after several minutes of arguing, a supervisor ordered officers to arrest Ahr. He began to struggle with officers and was brought down the porch steps. Police body camera footage shows Ahr struggling and exclaiming “I can’t breath! For real!” as officers pinned his arms behind his back in an attempt to get him handcuffed.

After the suspect was cuffed, he told officers he had only one working lung and struggled to catch his breath. A sergeant on the scene told the suspect that they were going to take him to the hospital.

A medical examiner determined his cause of death was “acute respiratory failure following the use of pepper spray during arrest of an individual with chronic pulmonary disease and COVID-19.”

State Attorney General Matthew Platkin said that “Police officers are required to be measured in their use of force in every encounter, even under challenging conditions.”

“This officer resorted to using pepper spray during a confrontation with a civilian in a manner that was unnecessary and contrary to his training, mishandling a situation that could have concluded so much differently,” he said.

The indictment — a single count of official misconduct — marks a rare case in which a New Jersey police officer is facing criminal liability stemming from a death in custody. In this case, however, the grand jury declined to bring more serious charges “directly related” to Ahr’s death weeks later as reported by NJ.com.

Stuart Alterman, the officer’s attorney, said that Officer Piotrowski was innocent and “conducted himself not only appropriately, but pursuant to his training by the Trenton Police Department.”

Travis Yates, author of The Courageous Police Leader, calls the indictment another example of cowardly leaders making the job impossible.

“While the state attorney did not tell anyone what he meant by the requirement of ‘measured’ in use of force, it may be time to remind him and everyone else what the United States Supreme Court says about police force,” Yates said.

Indeed, Graham v. Connor (1989) is clear that actions by law enforcement must be “objectively reasonable in light of the facts and circumstances confronting them, without regard to their underlying intent or motivation. The “reasonableness” of a particular use of force must be judged from the perspective of a reasonable officer on the scene, and its calculus must embody an allowance for the fact that police officers are often forced to make split-second decisions about the amount of force necessary in a particular situation.”

Yates continued that while the death of anyone is tragic, to always place blame on law enforcement, is both reckless and disingenuous.

“Society and New Jersey prosecutors specifically, simply cannot expect police officers to be clairvoyants when they encounter suspects in a rapidly evolving situation. The Supreme Court has made this clear for over three decades and it is unfortunate that another police officer will have to endure a reckless prosecution by officials that should know better,” Yates said.