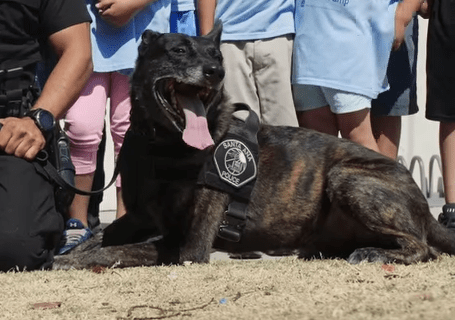 SANTA ANA, Calif. – K9 Puskas of the Santa Ana Police Department became well-known for a dramatic take down on Feb. 26, 2018. The police service dog (PSD) was remembered after passing away earlier this year.

Puskas, a Dutch shepherd, was 9-years-old when he helped apprehend a fleeing suspect during a pursuit that was captured by dramatic video. In the process, he also lost some teeth, Behind the Badge reported.

“This parolee tried to run over a Garden Grove police officer, and he got away. And their undercover unit somehow found him in our city,” said Santa Ana Police Cpl. Luis Galeana, who was Puskas’ handler.

Video footage showed Puskas taking a flying leap to make the apprehension. During the takedown, Puskas’ front muzzle smashed into the curb. As a result, the PSD broke all of his incisors.

Fortunately, Galeana was told by his veterinarian that those aren’t the teeth K9s typically use as much—although they are clearly helpful.

“He didn’t need those teeth,” said Galeana. “Our dogs bite with the molars, not the front teeth.”

So, despite missing some teeth, Galeana’s faithful partner continued in service for another year. He retired in 2019 with several felony apprehensions to his credit, according to BTB.

“He turned into a fabulous family dog,” Galeana said. … And there is no doubt he will be missed.