The shooter was 'trying to pick our officers off,' chief says 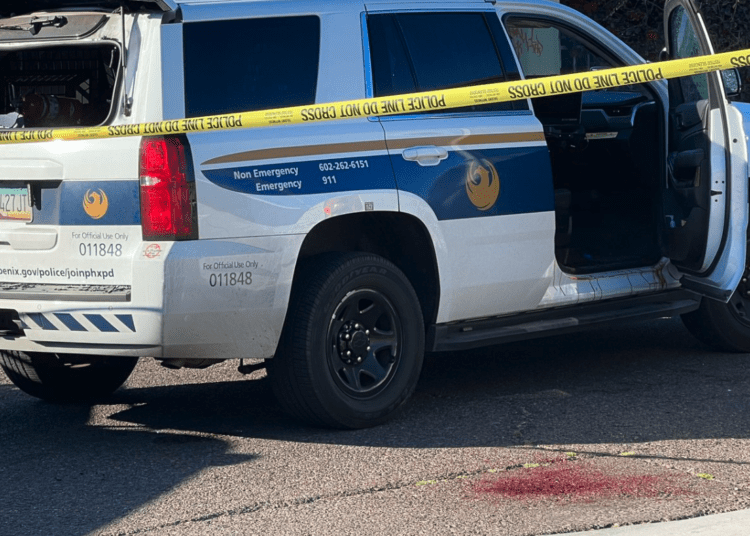 Two Phoenix police officers were apparently ambushed by a shooter lurking in the darkness. (Twitter)

PHOENIX — Police in Phoenix are searching for a suspect after two officers were injured during a shooting early Sunday morning.

The pair of officers were riding in their patrol vehicle when someone opened fire on them about 1 a.m. near 27th and Maryland avenues.

Officials said prior to the shooting, the officers attempted to make a traffic stop. However, the vehicle failed to yield and fled before officers lost sight of it, ABC 15 reported.

Not long after, the officers spotted the same vehicle and once again tried to make a stop, but the vehicle continued without yielding. When they reached the area of 27th and Maryland avenues, someone standing along the road started shooting at the officers, according to police.

The passenger officer suffered a gunshot wound to the wrist. He was taken to a nearby hospital and is expected to recover from his injuries.

HAPPENING NOW: ‘It appears that officers were shot by someone hiding in the darkness, literally trying to pick our officers off.’ @PhxPDChief

Chief Williams believes an officer was shot Saturday night in an ambush situation.

You can see the blood on the passenger door. | @abc15 pic.twitter.com/xml6w1Cv9M

The suspect who was operating the vehicle bolted from the automobile and fled on foot from the scene, according to police.

Partner officers responding to the shooting found the driver nearby and took him into custody. His identity was not disclosed and police are trying to determine if his actions are connected to what appears to be an ambush shooting.

“This is the 7th Phoenix officer shot and 12th injured in the line of duty in the past three months,” Phoenix Police Chief Jeri Williams said. “This kind of violence within our community and toward police officers cannot become the new normal.”

According to Williams, the shooter was hiding in the dark while “trying to pick our officers off,” ABC 15 reported.

Last month, nine Phoenix police officers suffered gunshot wounds and shrapnel injuries while responding to a shooting that led to an hours-long barricade situation, which ended with the suspect being found dead inside the Phoenix home. And Saturday morning an officer was injured near 75th Avenue and Buckeye Road when a man attempted to steal a police SUV. The man was shot by the officer and later died.