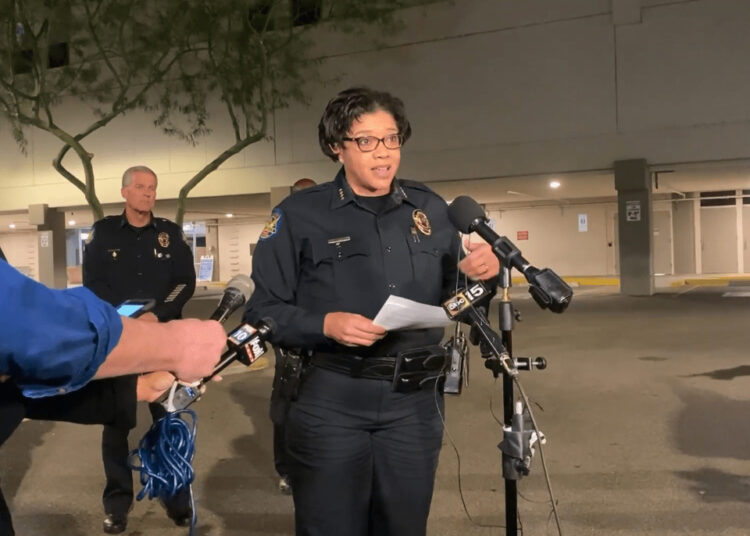 UPDATE: Nine Phoenix police officers were wounded Friday morning while responding to a shooting that led to an hours-long barricaded situation, which ended with the suspect being found dead inside the Phoenix home, according to investigators.

This is believed to be the highest number of officers shot in one day, Fox News reported.

Officers of the Phoenix Police Department initially responded to a report of a woman shot at a home in the area of 51st Avenue and Elwood Street – and the suspect allegedly invited the officers inside – before he opened fire and struck one of the officers multiple times, police officials said.

“The suspect ambushed him with a gun and shot him several times,” Sgt. Andy Williams told reporters at the scene.

More officers were then targeted shortly thereafter, when a man who was not the suspect placed an infant in a pink-colored carrier outside the home, police said. Police do not immediately believe the baby was brought out in an attempt to lure other officers.

“An adult male came to the door holding a baby, an infant,” Sgt. Williams recounted. “He placed an infant on the ground in front of the front door and then walked out towards the officers where they began detaining him. Other officers also moved in to secure that infant. At that time, the suspect opened fire on the officers again.”

The suspect opened fire and shot four more officers, while four others were struck by ricocheted bullets or shrapnel, police said.

“Those officers were all able to get back to safety, while two other officers returned fire at the suspect,” Sgt. Williams said. “They attempted negotiations with the adult male suspect and ultimately made entry into the home and determined that he was deceased inside.”

PHOENIX – Five officers of the Phoenix Police Department suffered gunshot wounds early Friday morning while responding to a shooting that led to an hours-long barricaded situation inside a house, police said.

Chief Jeri Williams said the officers were responding to a shooting at a home near 51st Avenue and Lower Buckeye Road about 3 a.m. When one officer approached to help, the suspect opened fire, striking him multiple times, Williams said, Fox News reported.

More officers were then targeted when a baby that was inside the home was placed in a carrier outside, police said.

“As officers went to bring that baby to safety, the suspect continued to shoot, firing and striking four other officers,” Williams said. “At that time our officers returned fire. The suspect then barricaded himself in the home and right now our special assignment unit is taking the lead on this scene.”

Williams said the shooting was “just one more example of the dangers our officers face every day keeping us and our community safe.”

Phoenix PD is working on a situation involving a barricaded subject inside a house. 1 person and several officers have been injured. https://t.co/WESfTiweS6

“If I seem upset, I am. This is senseless. It doesn’t need to happen, and it continues to happen over and over again,” she told reporters. “But I am thankful that our four officers are recovering and one of them is seriously hurt but is on the road to recovery.”

A woman at the scene also was reported to be critically injured, but police did not elaborate on her identity or relation to the shooting. The baby is reported to be safe, according to Fox.

Details were not immediately available, but the incident was resolved about 7 a.m. The suspect was not identified by police.