'There was guttural screaming,' says man at the nightlife venue 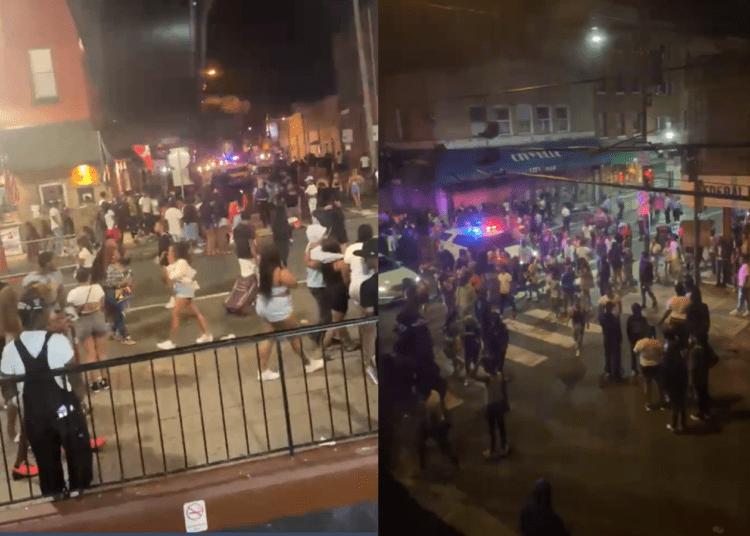 The mass shooting occurred on South Street near 3rd Street where two men and a woman were killed, the Philadelphia Police Department confirmed with WPVI.

Each victim from the Queen Village shooting rampage suffered multiple gunshot wounds, according to authorities.

Officers on patrol heard a succession of gunfire and rushed to the popular area, which is full of nightlife venues, bars and restaurants.

“You can imagine there were hundreds of individuals just enjoying South Street, as they do every single weekend, when this shooting broke out,” Pace said.

One of the responding officers fired at one of the gunmen from about 30 feet away. However, it was unclear if the suspect was hit, the New York Post reported.

*Alert* Emergency personnel are responding to a shooting incident in the area of 3rd and South Streets. Several people have been injured. Please avoid the area.

“We’re uncertain whether he was struck or not, but the officer was able to get that individual to drop his gun and flee,” he said, according to CNN.

Police recovered two weapons that were discarded at the scene, The Philadelphia Inquirer reported.

The victims’ identities were not disclosed as of early Sunday.

Among the dead are a 25-year-old woman and a 22-year-old man, the news outlet reported.

Seven victims were transported to Thomas Jefferson University Hospital, including one of the deceased victims.

Five others were taken to Pennsylvania Hospital, including a person believed to be a suspect, police said.

Three other victims were taken to Penn Presbyterian Medical Center.

Joe Smith, 23, was in the area when gunfire erupted, he told the Inquirer.

”Once it started I didn’t think it was going to stop,” Smith said. “There was guttural screaming. I just heard screams.”

Investigators are reviewing surveillance footage from the area as they try to identify shooters in the homicides. No arrests have been made.

Meanwhile, the city of Chattanooga, Tennessee experienced similar circumstances in an overnight shooting that left three dead and 17 wounded at a downtown bar and grille, Law Officer reported.