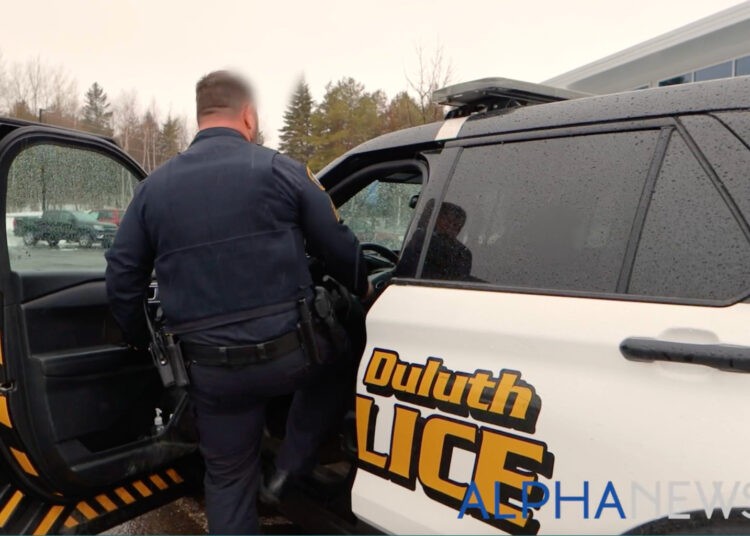 “The first time you ever use this drug you can die,” one investigator told us.

“You can get probably three to four times as much money selling heroin or fentanyl here as you can selling it on the street in Chicago,” another said.

In a popular tourist area known for its picturesque views of Lake Superior, Alpha News got an up-close look at a problem plaguing Duluth, Minn. It’s a problem that police, prosecutors, and mental health experts all agree the pandemic only made worse.

As a member of the Lake Superior Drug and Violent Crime Task Force, we were asked to keep one officer’s identity confidential in this story.

“Normally, when the guys see us, it’s when we’re arresting them and not before that,” he said.

“We just have a very large population of addicted people,” he told us, candidly.

The undercover officer describes Duluth as a direct hub to the drug trade for the small towns that surround it, with a supply to the south from the Twin Cities and Chicago.

“There’s a huge market here. We have a lot of treatment centers here. A lot of halfway houses, things like that,” he said.

Alpha News spotted some of the obvious struggles on several blocks in downtown Duluth. Several homeless people were begging for money on sidewalks and streets near those treatment centers.

Investigators say it’s all too often that a dangerous class of drugs is at the center of too many tragedies, taking place in secret.

“There’s no definition of what a heroin user is,” Lt. Nagorski said.

“It’s been a teenage cheerleader at a local school that was buying heroin,” he added.

“We had one kid who walked out of his room, handed his mom Narcan and said if I go down give this to me. This is a teenage kid that is that addicted who knows they are going to die and gives their parents Narcan if they stop breathing,” Lt. Nagorski explained.

Opioids, like heroin and fentanyl, were behind 29 deadly overdoses in 2020 in St. Louis County and 42 last year. 346 people overdosed but were ultimately saved.

‘Our numbers have gotten worse’

St. Louis County Attorney Kim Maki has been focused on accountability in the cases where she can.

“We’ve seen that throughout the pandemic our numbers have gotten worse,” Maki said.

“If a person is involved in the sale, distribution or delivery of a controlled substance that results in the death of another person, they can be held accountable for third-degree murder,” she added.

She is currently working six such cases.

Prosecutors focus on proving the chain of custody of the drugs to hold dealers responsible.

Court documents detail a conversation last October when a Virginia, Minn., woman reached out to David Chatman on Facebook messenger.

“Can u help me get some of that I was talking about the other day?” she asked.

“Yes. How much,” Chatman responded.

The investigation revealed that the heroin she bought contained fentanyl.

In another case last year, a Babbitt police officer found Devin Erickson, 19, slumped over in the driver’s seat of his truck.

A snapchat message led them to Bryce Duncan, 22, and a purchase of oxycodone pills, again laced with fentanyl.

“As long as we feel there is a likelihood of conviction, we will bring those cases,” Maki said.

There is a push in St. Paul at the State Capitol to change the criminal threshold for fentanyl.

The last significant changes to Minnesota’s illegal drug laws were made seven years ago.

Since fentanyl is more potent, deadly, and carries more of a profit, county attorneys believe it’s time for the law to catch up.

“Right now, for fentanyl the thresholds for charging match that of cocaine and meth and what we think should happen is that the threshold should be reduced to be at least equal with heroin because of how dangerous and addictive fentanyl is,” Maki said.

A mom shares her son’s story

Vicki Elliot shared her son’s story with the hope that it helps others find a way out.

“It gets you right around the throat and holds you hostage,” Elliot said.

Known for his bright eyes, bear hugs, and outgoing personality, Cole Elliot struggled with depression and anxiety. He eventually received a bipolar disorder diagnosis at the age of 19.

He spent four years in Duluth where his mom says his addiction took control.

“He finally disclosed to me, ‘Mom, I’m sick because I’m addicted to heroin.’ I had no idea, so I said I’ll be up there right now,” she added.

Cole finally agreed to treatment in 2018.

Two weeks later, he died at St. Mary’s Hospital from a blood infection at the age of 24.

“Things were put in my path to lead me to this position and the work that I’m doing and yes, there are so many people out there struggling,” Elliot said.

She now serves as executive director of Mental Health Connect, a nonprofit in the Twin Cities offering resources and services while working to reduce the stigma of an often-secretive lifestyle.

“Everything is booked up. Get on those waiting lists. Just put your name on all of them and the first one that comes up, go, just go,” Elliot urged.

“All of the illicit drugs are trafficked, manufactured, and produced in Mexico. What’s happened now is the trans-Atlantic criminal organizations see how easy it is to literally produce, manufacture and distribute illicit fentanyl,” von Trytek added.

But there’s no “quality control involved,” she pointed out.

The DEA says in a one-year period during the pandemic, 105,000 Americans died of drug overdoses. Sixty-six percent were fentanyl-related.

Von Trytek values a pill coming across the border at $5-$8 per pill. They will sell for more than 10 times that, $80-$100, on some of Minnesota’s reservations where opioid overdose rates are highest.

In recent cases, Duluth police seized counterfeit oxycodone pills known as M30s or Mexican Blues that were selling for 20 bucks a pill, or $2,000 in each small bag.

Police also showed us pictures of $18,000 worth of a heroin/fentanyl mix they recovered from another scene.

“You can see the level of money that is being generated. It’s huge,” von Trytek said.

“The reason we have to work up the food chain, so to speak, is you really want to get to the major players that are really making the money and really trafficking in that level of narcotics,” she added.

It’s why when arrests do happen, the Lake Superior Drug and Violent Crime Task Force tries to take out as much of the supply as it can.

“You make sure everyone is ready to go,” Lt. Nagorski said.

“You need to get as many people as possible in as short amount of time as possible,” Liz Collin said.

Just like they did in January, when 21 members of a Chicago-based drug trafficking organization were charged.

Investigators say local dealers would then distribute their drugs throughout northern Minnesota.

“When you’re able to arrest an entire organization and stemming back to Chicago, I think it sends a message to the dealers that this is not a good place to sell drugs,” Nagorski said.

He believes a strong rehabilitation process is the only way this problem turns around.

Along with a commitment to putting the kingpins, like Nicholas Calloway in the January case, in prison for as long as possible.

“We don’t benefit as a society from putting drug users in jail. We do benefit for putting people who prey on these people in jail for purely just wanting to make money,” he added.

The task force also credits assistance from the Violent Crime Enforcement Team, the High Intensity Drug Trafficking Areas program, and the Organized Crime Drug Enforcement Task Force for their work. A grant from the Bureau of Criminal Apprehension (BCA) is making some of that work possible.