A Force Science Institute course that was to be held at Ohio State University on March 12-13, has been cancelled after the university faced criticism for hosting the training.

The long established training focuses on using data and research in the investigation of police use of force incidents.

According to their curriculum, the group provides “science-backed facts about some of the most controversial force issues.”

This is what Major Travis Yates, the author of “The Courageous Police Leader: A Survival Guide for Combating Cowards, Chaos & Lies” and Lead Trainer at SAFETAC Training, said the problem was with the training.

“You have a scientific based training course that is recognized in courts across the land and it is the facts that this course brings that gets the cowards upset,” Yates told us.

We tend to agree. After all, nothing gets the social justice warriors upset more than pure facts. 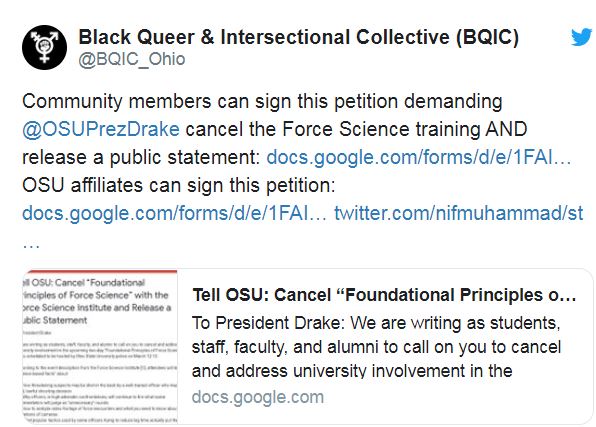 Advocates started a petition to stop Force Science Institute from coming to Ohio State. As of Wednesday evening, the petition had 486 signatures.

The petition states, “This language is incredibly disturbing and suggests that this class is little more than a training in how to get away with police brutality — legitimizing shooting civilians in the back, firing numerous rounds, and avoiding any slip-ups that could lead to any form of accountability for killer cops and justice for victims of police violence.”

According to Travis Yates, in a world where police bias is thrown around like candy, it is indeed interesting that bias is exactly why there is outrage over this training.

“Think about it.  These individuals have never been to the training. They don’t know anything about the training and yet they are demanding that the training doesn’t happen. If that isn’t bias, I don’t know what is and despite that, it’s always the cops that get accused of bias,” Yates said.

WBNS reports that Ohio State spokesperson Dan Hedman said the decision to cancel was made during the weekend.

“We have heard and understand the concerns raised by our community members and appreciate the feedback. The Department of Public Safety and its police division have decided that Ohio State will no longer host the training. Safety, inclusion and a sense of belonging are top priorities at Ohio State. We see this as the start of an important dialogue and a learning opportunity.”

Yates ultimately blames Ohio State University for the cancellation of training that has proven to be right and correct in some of the highest courts in the land.

“It is the epitome of cowardice and weakness. Law Enforcement or in this case a University letting crazy people decide what is best for law enforcement and they call that ‘inclusion’? It’s insanity and when you welcome insanity, you are opening the door for a host of problems and issues,” Yates concluded.