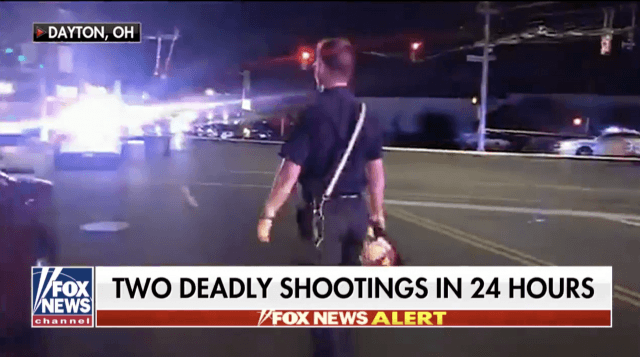 DAYTON, Ohio – Nine people were killed and dozens were hurt when a homicidal suspect wearing body armor opened fire outside a bar in Dayton, Ohio, early Sunday before responding officers shot the armed assailant to death less than a minute into the rampage, according to officials.

It was the nation’s second mass shooting in less than 24 hours after at least 20 people were slain in El Paso, Texas.

The Dayton Police Department said on Twitter the incident unfolded at 1 a.m. in the city’s Oregon District near downtown, but officers were nearby and “were able to respond and put an end to it quickly.”

The Oregon District was filled with “thousands” of people out on a weekend night at the time, according to Whaley. Officers were also stationed in the neighborhood and were able to halt the rampage less than a minute after it began, the mayor added.

“If Dayton police had not gotten to the shooter in under a minute—and figure that 26 injured, 9 dead—hundreds of people in the Oregon District could be dead today,” Whaley told reporters.

“This is extremely unusual, obviously, for any community, let alone Dayton,” Carper told reporters. “In our Oregon District, this is unheard of.”

The Oregon District is a historic neighborhood that Carper described as “a safe part of downtown,” home to entertainment options, including bars, restaurants and theaters. The shooting took place outside, on the 400-block of East 5th Street

One newspaper reporter told a local radio station that abandoned shoes were seen in the area of the shooting—left behind as panicking people fled. Police tape could be seen on Sunday morning near a pile of shoes outside the bar where the gunfire erupted.

Neither the shooter nor the victims were immediately identified. The FBI is assisting with the investigation, according to the Dayton Police Department.

Moreover, a family assistance center was set up at the Dayton Convention Center.

“I’m heartbroken,” Whaley tweeted around 6 a.m. Sunday. “Thank you to our first responders for all that you’ve done.”

I’m heartbroken. Thank you to our first responders for all that you’ve done. We will share updates as we have more information.

Ohio Gov. Mike DeWine said he was “absolutely heartbroken” over the Dayton shooting.

“I commend Dayton Police and other first responders for their bravery and quick response to save lives and bring an end to this tragedy,” the governor said in a statement.

DeWine said he spoke with Dayton’s mayor and offered any assistance on behalf of the state.

“I have been briefed by the Ohio Department of Public Safety, and the Ohio State Highway Patrol has offered assistance to local law enforcement as they investigate this heinous act,” DeWine said, in part. “I have ordered that flags in Ohio remain at half-mast in honor and memory of the victims who lost their lives this morning.”

The shooting reportedly took place near Ned Peppers Bar in the city’s Oregon District. But Dayton police were checking other bars in the area for the possibility of additional shooting victims. All of the gunfire happened outside the bar with the suspect using a “long gun,” Carper said, according to WTVN radio of Columbus.

“We’re trying to identify the motivation behind this,” Carper told the station.

President Trump said Sunday morning that FBI, local and state law enforcement are working together in El Paso and in Dayton, Ohio.

The FBI, local and state law enforcement are working together in El Paso and in Dayton, Ohio. Information is rapidly being accumulated in Dayton. Much has already be learned in El Paso. Law enforcement was very rapid in both instances. Updates will be given throughout the day!

“Information is rapidly being accumulated in Dayton. Much has already be (sic) learned in El Paso,” the president tweeted. “Law enforcement was very rapid in both instances. Updates will be given throughout the day!”

Ned Peppers Bar posted a message on Instagram, saying: “All of our staff is safe and our hearts go out to everyone involved as we gather information.”

Nikita Papillon, 23, told the AP she was across the street at Newcom’s Tavern when the shooting started. Papillon said she saw a girl she had talked to earlier lying outside Ned Peppers Bar after the rampage ended.

“She had told me she liked my outfit and thought I was cute, and I told her I liked her outfit and I thought she was cute,” she told the AP, adding that she had been to Ned Peppers the night before. Papillon described it as the kind of place “where you don’t have to worry about someone shooting up the place.”

“People my age, we don’t think something like this is going to happen,” she said. “And when it happens, words can’t describe it.”