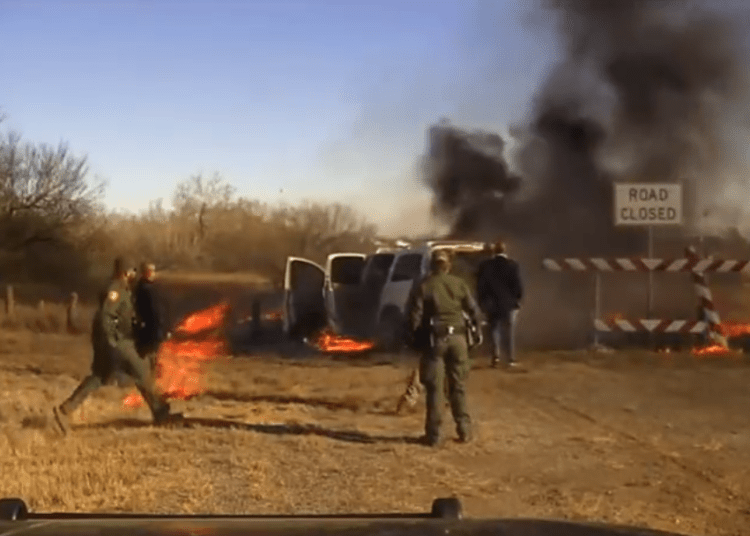 LAREDO, Texas – New video footage shows the moment Texas troopers and Border Patrol agents rescued a woman from a burning vehicle after she had been smuggled across the border, and was trapped in a duffel bag.

CBP agents pursued a human smuggler on March 24 in Laredo. Texas DPS soon joined the pursuit. The smuggler crashed and bailed out of the the van, which caught fire, Fox News reported.

The smuggler was immediately taken into custody and told law enforcement personnel that a woman was zipped up inside a duffel bag in the back of the van.

“She’s in the bag,” someone was overheard saying from one of the officer’s bodycams.

As a result, law enforcement officers immediately smashed out the rear window and pulled out the bag. A woman was discovered trapped inside, and thus saved from the fire.

“Holy crap,” one person can be heard saying after the woman was rescued.

NEW: Absolutely wild footage from a @TxDPS trooper’s bodycam following a fiery human smuggler pursuit crash near Laredo. It shows TX troopers and Border Patrol agents saving the life of a woman who was zipped up in a duffel bag being smuggled inside the burning car. @FoxNews pic.twitter.com/OZmAlz0xnj

At the behest of Gov. Greg Abbott, Texas DPS personnel have been working to help CBP secure the border as agents encounter massive numbers of migrants and attempted border crossings.

The number of migrants coming across the border has remained high throughout 2021 and into 2022. There were more than 164,000 migrant encounters in February and that number is expected to have risen in the month of March. Furthermore, there is an another anticipated surge coming this summer, Fox reported.

Sadly, there is an untold number of illegal immigrants that have already encroached U.S. territory without being detected due to the Biden administration policies that have encouraged a continual wave of humanity.