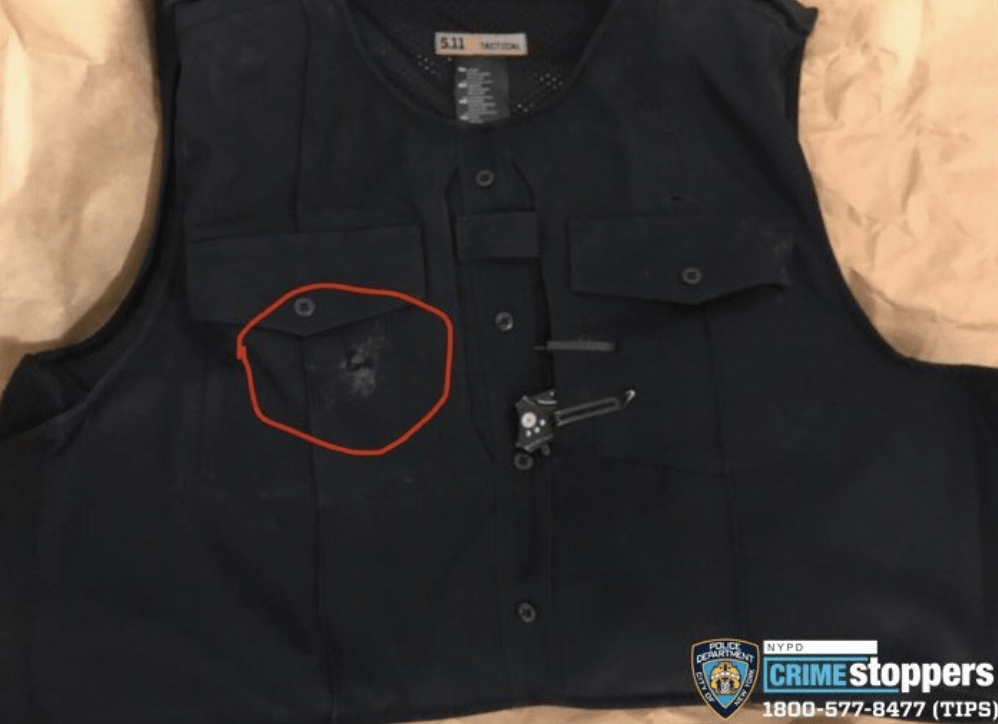 NEW YORK – An NYPD officer was saved by his body armor Wednesday morning, after he was shot during a “violent” altercation with a naked man who was then shot by police. The suspect later died, officials said.

Eight officers from the 32nd Precinct responded at around 1:51 a.m. to a residential building in Harlem, where a 29-year-old male was reported to be “harassing” a female and “banging on doors and breaking glass” inside the building, Police Commissioner James O’Neill said during a news conference.

Once inside the building, officers began to search the second floor — which is when one officer, who has yet to be identified, located the man in question, who was naked and armed with a 9-millimeter semiautomatic handgun, Fox News reported.

At approx 01:51, Officers from the @NYPD32Pct responded to a 911 call for harassment inside 2785 Frederick Douglas Blvd.
While inside the building, one officer suddenly encountered the suspct, standing naked, pointing a gun at the officer.

O’Neill said the two got into a “violent” struggle. As a result, the officer called for help and several other officers began to fire at the suspect.

At some point, the officer was shot in the chest. However, the round did not penetrate his body armor, O’Neill said. Consequently, the suspect was shot several times and later pronounced dead at Harlem Hospital.

The officer is in stable condition & is currently being treated at St Luke’s Hospital.

The 29-year-old suspect, who has had previous interactions with the police, was pronounced deceased at Harlem Hospital. The suspect’s firearm (previously pictured) was recovered at the scene

Moreover, the officer also suffered several injuries to his face after being punched during the altercation.

O’Neill said the officer joined the department in 2012. Furthermore, he is being treated for non-life threatening injuries and recovering at St. Luke’s hospital.

“Today we are reminded that no call is ever routine,” he continued.

Police did not identify the suspect but said he had a history of domestic violence calls against him.

Law Officer is the only major law enforcement publication and website owned and operated by law enforcement. This unique facet makes Law Officer much more than just a publishing company but is a true advocate for the profession.
Tags: body armorbullet proof vestnypdoissoft body armor