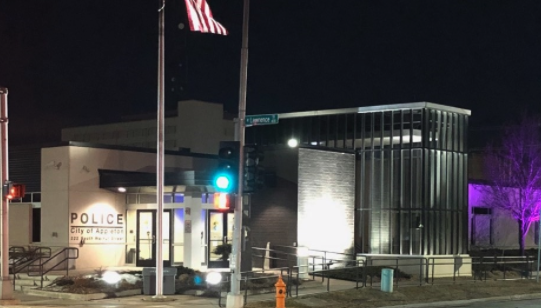 APPLETON, Wis. – A Wisconsin police officer was ambushed and stabbed in the police department parking lot. A second officer was injured while taking the suspect into custody.

The following information was provided by the Appleton Police Department on Tuesday:

This morning, around 2:17 A.M., an officer, in a marked squad car, observed a vehicle following him for an extended distance. The officer drove toward the police department and notified other officers. Officers were advised of the vehicle being previously involved in similar activity in a different jurisdiction. An attempt was made to stop the vehicle. The driver fled but officers did not pursue the subject because of the lack of any serious charges.

Around 4:15 A.M., the officer, followed earlier in the night, was in the parking lot of the Appleton Police Department. When he got out of his squad he noticed a car parked in the street by the parking lot. It appeared to be the same vehicle that was following him earlier.

The officer saw a male standing near the employee entrance to the police department. When he tried to speak with him the subject charged at him. The subject had concealed his right hand behind his leg and appeared to be holding something in it. The officer created distance between him and the individual, while trying to identify what the male was concealing. The male attacked the officer. During the attack, the subject stabbed the officer several times with a kitchen-style knife. The officer fought back and brought the male on the ground. Additional officers responded and were able to get the subject under control and into custody. One of the other officers involved also suffered a cut, from the subject’s knife, to one of their hands.

The male was taken to a local hospital for treatment. When he is medically cleared, he will be placed in jail. The Appleton Police Department will be requesting charges of Attempted First Degree Intentional Homicide and Battery to a Police Officer. Additional charges may be filed as a result of our ongoing investigation. The subject arrested is Troy J. VanGrinsven, a 49 year-old male from Kaukauna. The officer’s names will not be released. Both officers were medically treated and released.

“It is only because of the outstanding tactical skills, and the mental and physical fitness of the officer involved, that this incident didn’t end more tragically. These are the threats that all our law enforcement officers are facing more frequently. No matter what uniform they wear, we thank all of them, and their family members, for the sacrifices they make every day to serve their communities.” Chief Todd Thomas