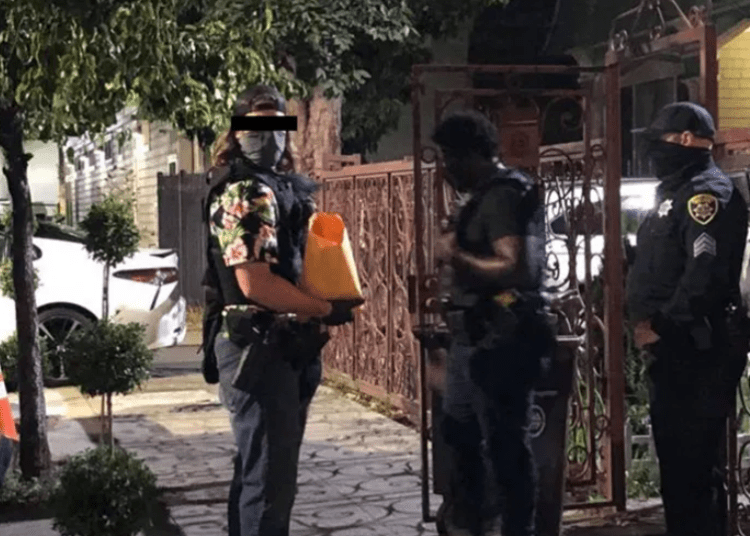 Just when you thought things couldn’t get any crazier, an undercover Oakland police officer is under fire for wearing a Hawaiian shirt under his tactical vest.

Residents have accused him of having an affiliation with the the right-wing extremist boogaloo movement, whose members favor tropical shirts and anticipate a second civil war.

Upset residents called on Interim Chief Susan Manheimer to investigate her plainclothes officer after a photo taken Saturday showing him wearing a tropical shirt during a West Oakland police raid was placed on social media.

Mercury News reports that the chief downplayed the accusation in an e-mail to one resident that the officer would be part of the boogaloo movement by taking the resident through her recent shopping trip to Macy’s. She included a photo she snapped of a Tommy Bahama display, sending it to the resident along with other reasons why people wear tropical shirts.

The chief said that she saw “many racially diverse individuals waiting to purchase” the Tommy Bahama Hawaiian shirts.

“While Hawaiian shirts or palm trees may be worn by members of different groups they’re also worn and sold universally — in fact there was a big sale today at Macy’s as I was shopping and saw many diverse individuals purchasing and wearing the Hawaiian attire made famous by Tommy Bahama — including my dress today that I just noticed had a Hawaiian palm tree pattern — although it could be a Floridian shirt as I purchased it in Key West on a recent trip.”

It went on, “I can assure you that Hawaiian attire or the palm tree insignia is no more significant of alignment of a certain extremist group than it is of appreciating colorful attire, having a license plate from certain states, or even visiting Hawaii where you will find thousands of vacationers sporting them.”

The boogaloo movement began on the online chatroom, 4chan’s /k/ section, and began as a devotion to the ownership and purchase of weapons.  The name “boogaloo boys” is a reference to the 1984 movie Breakin’ 2: Electric Boogaloo. In 2012, users on /k/ began referring to the possibility of “Civil War 2: Electric Boogaloo.” Many of the posts are clearly jokes and it is unknown if any of it is actually real.

But who needs reality in 2020 when a tropical shirt triggers Oakland residents.