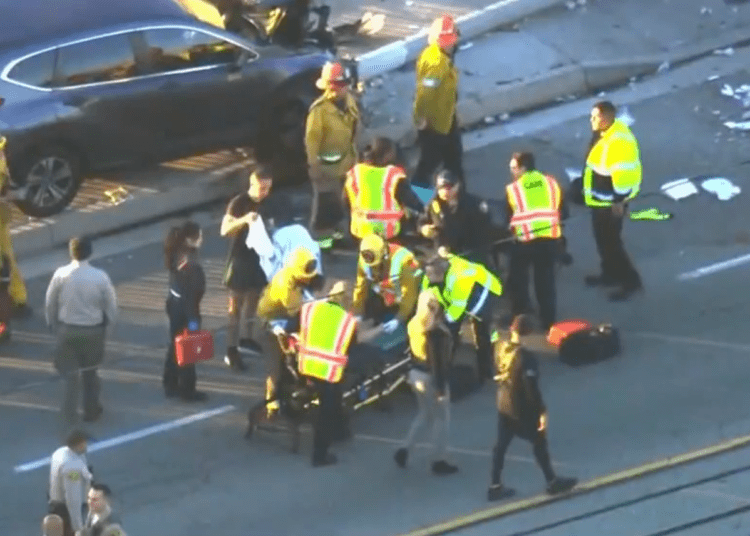 UPDATE: Nicholas Joseph Gutierrez, who was charged with attempted murder of a peace officer, was released at 9:49 p.m. Thursday, according to jail records that cited an insufficient complaint, CNN reported.

“It’s not like they arrested the wrong suspect,” Mares told CNN. “They just want to make sure the investigation is going to be complete.”

“They did a thorough investigation. They interviewed dozens and dozens of witnesses and victims,” Villanueva said, regarding the crash believed to be done intentionally. “That was the conclusion.”

LOS ANGELES COUNTY, Calif. – A California man has been arrested on suspicion of attempted murder on peace officers after a barreling his SUV Wednesday morning into recruits from the Los Angeles County Sheriff’s Department while they were out for a morning run.

Sheriff Alex Villanueva said 75 recruits from Sheriff’s Academy Class 464 were running near the intersection of Mills Avenue and Telegraph Road in Whittier, California, just before 6:30 a.m. when they were struck. The driver of the vehicle was identified as Nicholas Joseph Gutierrez, 22, of Diamond Bar, the Los Angeles Times reported.

Villanueva confirmed 25 recruits were injured with five of them listed in critical condition. Of the 25 injured recruits, 20 were from the LASD, 2 were from Bell, 2 were from Glendale and one was from Pasadena.

Injuries ranged from head trauma to broken bones and loss of limbs, the sheriff noted, adding that one recruit is on a ventilator, Law Officer reported.

Gutierrez was arrested Wednesday, hours after the early morning crash, authorities said. His bail was set at $2 million, according to KTLA. He has since been charged with attempted murder on a peace officer, with “additional charges pending,” LASD said on Thursday.

One witness said “it looked like an airplane wreck,” Villanueva said at a news conference Wednesday.

“There was so many bodies scattered everywhere in different states of injury that it was pretty traumatic for all individuals involved,” he said.

Sadly, the sheriff referred to some of the severe injuries, such as the head trauma and lost limbs, as “life-altering.”

Authorities are still trying to determine why Gutierrez swerved into the recruits.

Los Angeles County Fire Capt. Marcos Espiritu said he was working an overnight shift at Station 96 on Mills Avenue when he heard the familiar sounds of dozens of recruits running nearby just prior to sunrise. However, it was soon followed by the sounds of horror. A deputy recruit banged on the station door and pleaded for help, the Los Angeles Times reported.

Espiritu and another firefighter rushed the few hundred feet to the crash site.

Gutierrez is being held in an LASD facility in Norwalk and is due to appear in court Friday morning.