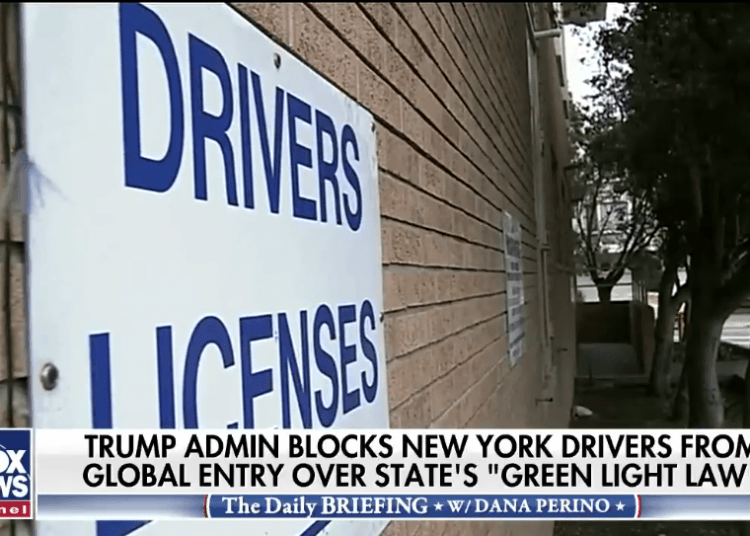 NEW YORK – The Green Light Law allows illegal immigrants to obtain driver’s licenses in New York, while also prohibiting DMV agencies across the state from sharing criminal records with Customs and Border Protection (CBP) and Immigration and Customs Enforcement (ICE). It was that aspect that led DHS last week to suspend enrollment in Global Entry and several other Trusted Traveler Programs (TTP) for all state residents.

The Chiefs Association wrote a letter to Acting Homeland Security Secretary, Chad Wolf, thanking him for notifying leaders of recent actions taken by the Department of Homeland Security [DHS] in response to New York’s “Green Light Law.” The letter emphasized the importance of sharing information with law enforcement, something that is not being accomplished in sanctuary jurisdictions.

The letter, signed by President Patrick Phelan, said that the association “opposed passage of this regrettable law and we maintain that position today.”

“Our members fully recognize that sharing pertinent law enforcement information and vital resources across local, state and federal boundaries is critical to ensuring the safety of the communities we serve,” the letter said.

“It is our hope that reasonableness will prevail by all involved and that an appropriate resolution can be attained,” it says. “What’s ultimately required is an operational and administrative process that prioritizes public safety for all New Yorkers and serves as its fundamental cornerstone,” the letter said.

Wolf said in a letter to New York officials that the law “compromises CBP’s ability to confirm whether an individual applying for TTP membership meets program eligibility requirements.”

“This Act and the corresponding lack of security cooperation from the New York DMV requires DHS to take immediate action to ensure DHS’ s efforts to protect the Homeland are not compromised,” he said.

The support from the New York police chiefs comes in the face of furious Democratic opposition to the move, according to Fox News. New York State Attorney General Letitia James has sued DHS, alleging “political retribution” from the administration. Meanwhile, House Democrats have written to DHS demanding documents relating to the decision and slamming it as a “senseless, retaliatory” move.

Nevertheless, Wolf aggressively defended the decision, rejecting the idea that it had to do with the granting of licenses to illegal immigrants, and instead pointing to the law’s unique prohibition on information sharing.

Wolf said applicants are supposed to be subjected to checks and those with criminal records would be disqualified from the program, but New York was not letting CBP check DMV databases in order to vet the applicants.

“Because New York took this action, the department had to respond and take appropriate action to make sure that the rest of the individuals in these programs continue to be able to use the program,” Wolf said. “Without access, we cannot run a proper security check and a risk assessment, and that is simply dangerous.”