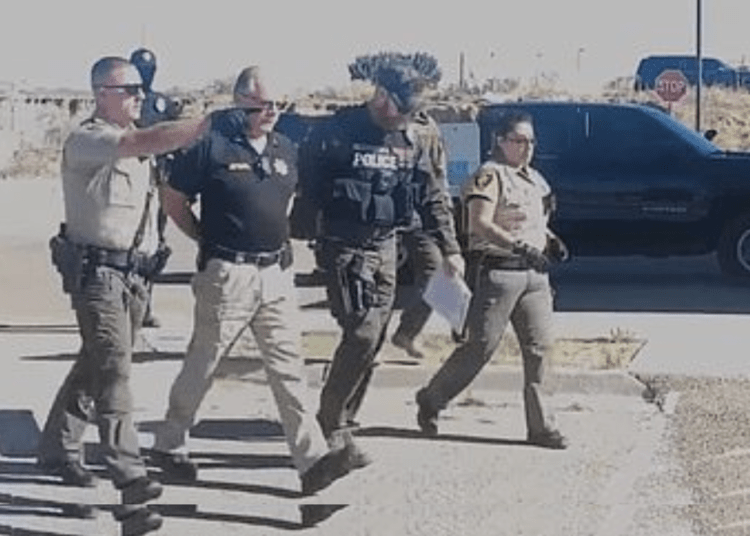 Sheriff James Lujan has been accused of interfering with criminal investigations, according to Espanol Police. (Screenshot KRQE)

ESPANOLA, N.M. – Police in New Mexico have arrested a local sheriff on Thursday after he allegedly refused to comply with a search warrant for his phone that authorities needed to check for evidence of him interfering in criminal cases involving local politicians.

Española Police arrested Rio Arriba County Sheriff James Lujan after he refused to unlock and turn over his phone to responding officers, instead insisting to speak with his attorney, Daily Mail reported.

“Wow, I’m handcuffed,” Sheriff Lujan said to officers as he was being detained. “You tell me to do something. I can’t do nothing because I’m handcuffed. I asked for my attorney.”

Local law enforcement officers had a warrant for the phone because they believed it would show evidence of the sheriff interfering in criminal cases, including crimes involving Española City Councilor John Vigil and Phillip Chacon. Chacon has been arrested numerous times in the area.

“I think the search warrant is incorrect and possibly invalid, but we’ll have to take that up with the court,” Defense Attorney Nathaniel Thompkins explained to KRQE.

Police showed up at the Sheriff’s Office last week with search warrants for Lujan’s work and personal cell phones. He accused them of treating him unfairly. “This is harassment and retaliation because I told the city council that you shouldn’t be the chief,” he can be heard saying on police lapel video.

Sheriff Lujan eventually gave police two phones, but police later noticed he did not give them his iPhone, which he is seen using in lapel video from Española Police scenes where the sheriff is accused of trying to take over or interfere.

One video filmed in March showed Lujan on the scene of a SWAT situation with the iPhone.

Police were trying to arrest Chacon for a probation violation when the sheriff arrived, they said.

Lujan is said to have smelled of alcohol and was a distraction for the officers, refusing to leave.

He was charged with resisting and for evading or obstructing an officer. The sheriff was tagged with two additional charges on Thursday, KRQE reported.