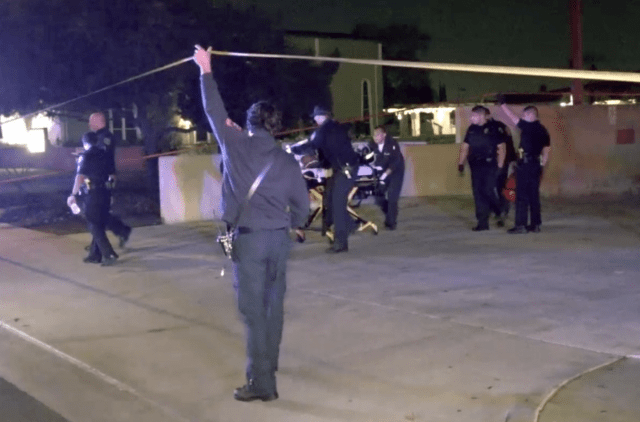 A man is transferred to an ambulance after a police shooting in Anaheim on Thursday night. He later died from his injuries. (OnScene.TV via Los Angeles Times)

ORANGE COUNTY, Calif. – Officers from neighboring agencies were involved in two fatal shootings within close proximity and time. Police fatally shot a man in Anaheim late Thursday, hours after another man was shot and killed by police in a separate incident in the city of Orange.

A short time after arriving, police made contact with a man inside a parking garage beneath a two-story apartment complex, Carringer said. It was not immediately clear what additional interaction occurred between officers and the man, but just before 11 p.m., police fired at him, reported the Los Angeles Times.

The man whose identity was undisclosed was in his 30s. He was transported to UC Irvine Medical Center, where he died of his injuries, Carringer said.

Additional details about the circumstances surrounding the shooting, including what prompted it and how many officers fired their weapons, were not available. The Orange County District Attorney’s office is handling the investigation, which is customary in shootings involving officers in Orange County.

All three officers who responded to the scene were wearing body cameras, which were activated, Carringer said. The D.A.’s office will review the videos as part of its investigation.

Moreover, the fatal shooting was the second OIS in Orange County on Thursday.

Earlier in the day, police in the city of Orange shot and killed a man who authorities say was armed with a knife after his family members called 911 to report that he was suicidal, investigators said.

The man was standing in the street when officers responded to the 6900 block of Magdalena Drive near San Rafael Court shortly after 11:20 a.m., said Sgt. Phil McMullin of the Orange Police Department. The man ignored officers’ commands and advanced toward them, police said.

As a result, officers deployed a Taser in an attempt to use nonlethal force before opening fire. The man, who was in his 40s, died at the scene, McMullin said. His identity was not released. A knife was found nearby, police said.

The Orange County District Attorney’s office is investigating that shooting as well.