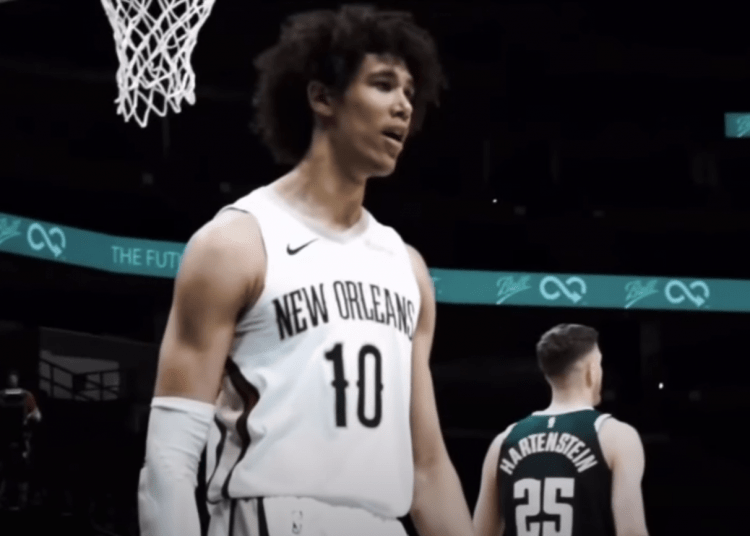 LOS ANGELES — Los Angeles Police Department says NBA center Jaxson Hayes of the New Orleans Pelicans resisted arrest and had to be subdued by Taser while officers were investigating a domestic violence call on Wednesday morning.

Officers were responding to a domestic dispute in the 22000 block of Mariano Street when they made contact with Hayes, 21, in the front yard of a residence shortly before 3 a.m., according to a LAPD.

When officers informed Hayes they needed to speak with someone inside the residence, they say, he tried to prevent them from entering, ESPN reported.

Footage from police body cameras reportedly shows Hayes trying to enter the residence despite warnings from officers. As he continued to be non-compliant and actively push forward, officers called for backup and tried to place Hayes’ hands behind his back. However, he broke free and pushed an officer into a wall.

As a result, officers used force to take Hayes to the ground. As he continued fighting with officers, they used “two deployments of the Taser, as well as bodyweight and physical force.” Police say the altercation lasted two-and-a-half minutes before Hayes was handcuffed.

As a result of the violent confrontation, both a police officer and Hayes received treatment for unspecified injuries at a local hospital and then released.

Hayes was booked Wednesday under “California Penal Code section 69, Resisting Arrest,” which is a felony and carries a stiffer penalty and includes using violence to try to prevent officers from doing their duties. A conviction on that charge could carry a maximum of three years in custody. He was released from jail after posting $25,000 bail.

According to LAPD, a woman at the home where Hayes was arrested declined to cooperate with the officers’ investigation into the original domestic dispute call, ESPN reported.

LAPD says its force investigation division is now reviewing the incident because of “the possibility of force being applied to Hayes’ neck during the use of force.”

The New Orleans Pelicans released a brief statement, according to KTLA.

“We have been made aware of the incident involving Jaxson Hayes,” the statement read. “We are working in conjunction with the NBA and Jaxson’s representatives to gather more information and will have no further comment at this time.”

Hayes was the eighth overall pick in the 2019 NBA draft and averaged 7.5 points and 4.3 rebounds for the Pelicans last season. He played collegiately for the Longhorns at the University of Texas.

Hayes is scheduled to make his first court appearance on Jan. 24, 2022.