Three men have been taken into custody 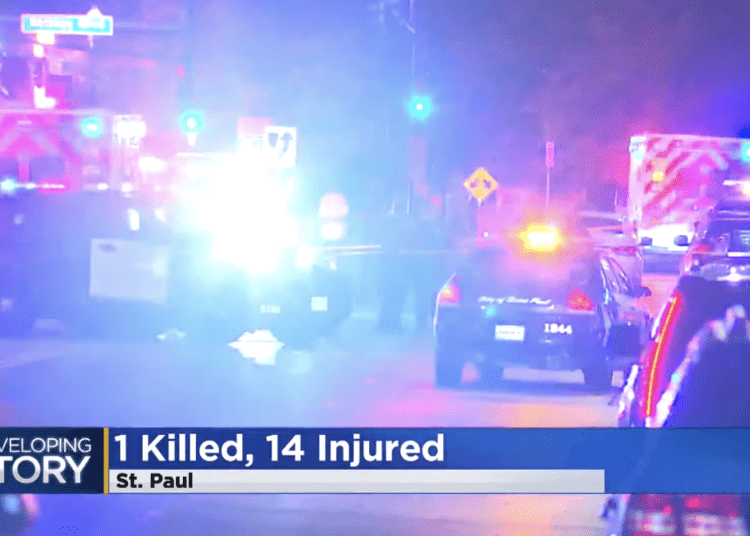 ST. PAUL, Minn. — A mass shooting occurred at a crowded bar in Minnesota early Sunday as 15 people were struck with by gunfire. One woman was pronounced dead as there were “bullet holes all over.” Three men have been taken into custody, according to police.

Officers responded to the Seventh Truck Park bar in St. Paul about 12:15 a.m. Police said in a statement they found a infernal crime atmosphere.

“In an instant, they found themselves caught in a hellish situation,” according to St. Paul Police Chief Todd Axtell.

Gunshot victims were discovered strewn about, inside the bar, on the sidewalk and in the street, the Pioneer Press reported.

A woman in her 20s was pronounced dead at the scene. She has not been publicly identified by law enforcement authorities. However, a person close to the woman identified her as Marquisha Wiley, and described her as a “magnetic” young woman who was “bright, joyful and supportive,”  CBS Minnesota reported.

“My heart breaks for the woman who was killed, her loved ones and everyone else who was in that bar this morning,” said Axtell.

“I think about the young woman who died,” Linders said. “One minute she’s having a good time, the next minute she’s lying in her friends’ arms who are trying to save her life and she didn’t make it. I can’t think of anything worse.”

Three men, ages 33, 32 and 29, were arrested. One of the suspect’s had an active warrant for his arrest. According to documents, he failed to show up for a sentencing hearing in May. Two are convicted felons with lengthy criminal histories. The suspects have not yet been charged, so CBS Minnesota is not naming them.

“The suspects are currently in the hospital being treated for injuries,” Axtell tweeted.

Three men have been arrested in connection to this morning’s shootings and the tragic death of a woman in her 20s.

The suspects are currently in the hospital being treated for injuries

Linders said the barrage of gunfire left “bullet holes all over in the bar” and that investigators would reconstruct the shooting and “deconstruct everything to figure out what happened.”

Ramsey County Sheriff Bob Fletcher was also at the scene Sunday afternoon. He told CBS Minnesota the motive for the shooting is still unclear.