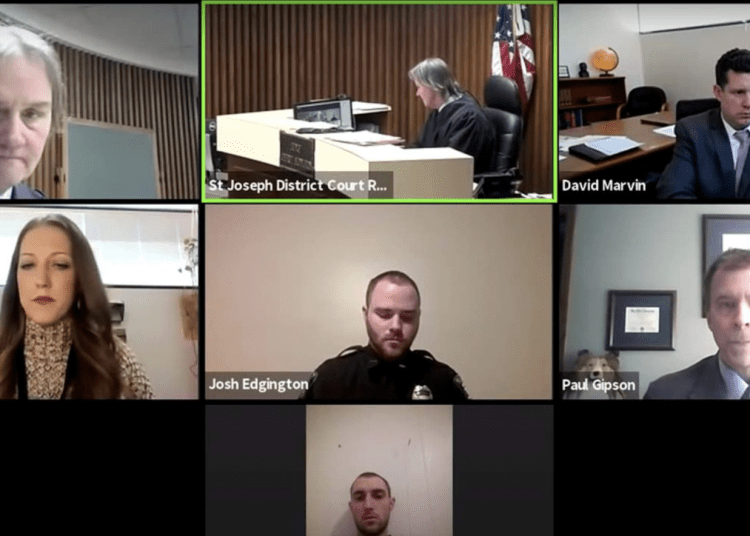 CENTREVILLE, Mich.  — Most judges will say witness intimidation happens from time to time, and that it usually occurs outside the courtroom where it’s hard to prove. But a Michigan man charged in a domestic violence case reportedly appeared at a court hearing remotely from the victim’s house last week — despite a no-contact order compelling him to stay away from her, thus making the offense easy to discern, WOOD-TV reported.

Coby Harris, 21, is accused of beating his girlfriend, Mary Lindsey, at her Sturgis apartment last month. He’s been charged with assault with intent to do great bodily harm less than murder. The felony is punishable by up to 10 years in prison and a fine of up to $5,000. Harris’ status as an habitual offender could bump the sentence to 15 years.

According to WOOD-TV, Assistant District Attorney Deborah Davis had been tipped off before the hearing that Harris might be present in Lindsey’s home and sent officers to the scene in advance.

At one point during the hearing, Davis apparently concluded that the two were at the same address.

As Davis was asking Lindsey about the night of the crime, she appeared reluctant to answer questions or explain why she called police.

Then Harris’ camera shut off for a few seconds, and Lindsey looked to the side, her face off-screen.

“Your honor, I have reason to believe that the defendant is in the same apartment as the complaining witness right now, and I am extremely scared for her safety,” she said. “And the fact that she’s looking off to the side and he’s moving around — I want some confirmation that she is safe before we continue.”

The judge asked both the victim and the suspect where they were.

The judge asked Harris where he was, and he gave a different address.

The judge asked him to take his phone outside, while on the Zoom call, and show him the house number.

Harris claimed his phone didn’t have enough charge, and both Judge Middleton and Davis shook their heads.

Davis notified the court that police had already been sent to Lindsey’s residence and were knocking on the door just as Harris was giving his location as somewhere else.

Both Harris’ and Lindsey’s cameras cut out of the call as she answered the door for responding officers.

“This is an issue we didn’t have when we were at live court,” Middleton said. “This is the first time to my knowledge, if he is in the same venue that this has occurred. Kudos to the Sturgis Police Department for following up on this.”

As if on cue, Harris reappeared, this time from Lindsey’s phone, with a cigarette in his mouth and a police officer standing behind him, Fox reported.

“Your honor, me and Mary both don’t want the no-contact, I ask that that be dropped,” he said. “I’m sorry I lied to you. I knew the cops were outside. I don’t know why I lied to you.”

As he’s giving his excuse, Davis can be seen face-palming, around 13 and a half minutes into the stream.

“Mr. Harris, I advise don’t say anything else,” the judge replied. “Take the cigarette out of your mouth. The hearing is adjourned,” WOOD-TV reported.

Middleton then told Harris his bond was canceled and noted that Davis would probably file an additional charge of obstruction of justice against him.

“It may be a situation of you and Mary want the bond conditions lifted, [or] you want them lifted, she does not,” he said. “We’re serious as a heart attack, it’s the first time I ever had anybody sitting in the next room potentially intimidating a witness.”

“You hit bottom and you’re continuing to dig,” Middleton added, before instructing the officers to take Harris into custody.