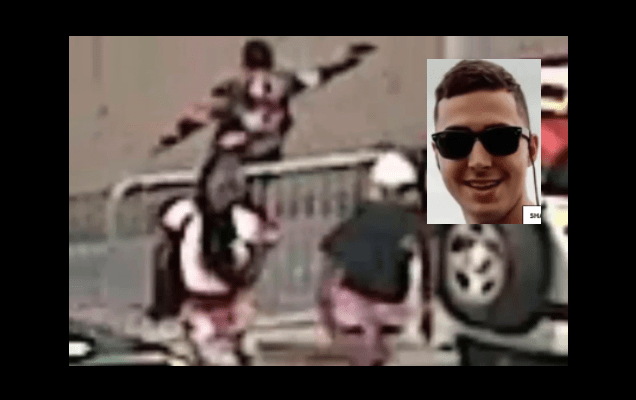 Samuel Poulin (inset) was hit by a stray bullet from a NYC gunman. (DCPI/Instagram)

NEW YORK — A United States Marine who was visiting New York City was struck by a stray bullet in Times Square Sunday afternoon.

Police released alarming video footage early Monday of the gunman who opened fire about 5:15 p.m., striking Samuel Poulin, 21, a Marine, in the upper back by a ricocheting round as people sought to get out of the suspect’s path, New York Post reported.

A man in a red and black top fired off at least two rounds in Times Square late Sunday afternoon. (DCPI)

The shooting occurred outside the Marriott Hotel on West 45th Street and Broadway, according to NYPD sources. Poulin was with his wife, sister and brother-in-law when he was shot. He was visiting the Big Apple from upstate Northville for a baptism.

According to sources of The Post, a family member removed the slug from Poulin’s back and gave it to police. The Marine was taken to Bellevue Hospital in stable condition, they said.

Samuel Poulin was hit by the gunman’s ricocheting bullet. (Instagram)

The gunfire erupted amid a dispute between two groups — possibly CD peddlers, according to police sources. The suspect fled east on 45th Street toward 6th Avenue. He remains on the loose as of early Monday morning, The Post reported.