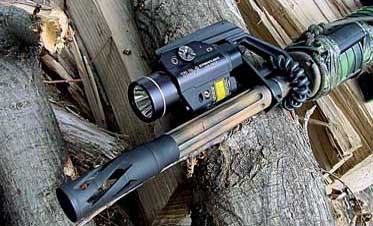 It's the basics that win out. Be it gear or tactics, the simple version usually rules. I've believed that and lived it for many years, so it's not easy for me to embrace new technology on the gear side of things. But when something new is obviously superior in form and function, it's time to get with the program.

I spend a good deal of time working and training with firearms and accessories designed for the law enforcement tactical and patrol environment. This discussion will focus on the light and the laser, looking at what the newest technology and design bring to officers on the street.

The days of the $10 D-cell flashlight have long past. Today we have new and amazing light-emitting diode (LED) bulbs driven by lithium batteries with run times now reaching 13 hours and more.

I grabbed the first SureFire 6P I saw in the late 1980s. Instead of carrying a long heavy light as my only option, the SureFire gave me a small handheld light that fit my pocket or belt holder and had a one-hour run time with an incandescent bulb. We fit them to our Mossberg 500s, Remington 870s, MP-5s and later our AR-15 carbines, and we developed upgraded handgun and flashlight low-light exercises. The lithium batteries cost nearly $5 apiece and the bulbs broke with rough handling, but we were happy to have them.

User need and industrial competition drives product development. As was the case with night sights, light rails for weapon-mounted lights have become commonplace on production duty-type handguns. Rifle and shotgun mounting solutions are varied and numerous. In our firearms classes, we ve seen the jump of the handgun with mated light and holster move from SWAT to the street officer.

The concern by administrators that the dedicated handgun-mounted light would cause officers to inappropriately use the pistol as a light proved to be a non-issue with proper training and adding a second handheld light to the officer s gear.

Early on we dealt with the issue of carrying a pistol-mounted light separately and attaching it when needed. But this left us in the dark when conditions required we holster up. No time to take it off, no fit in the holster. So, Safariland, Blackhawk, Uncle Mike s and other holster makers developed holsters for both patrol and SWAT that accept dedicated lights.

For an officer to work without effective lights that s right, more than one is a serious shortfall. Dayshift officers must enter dark buildings, and afternoon and midnight shifts live in darkness. We literally live or die by what we can or can t see, so good lighting is not a luxury.

K-9 officers in particular need this gear. Working with one free hand with their partner on lead, the handgun-light combination affords far greater protection in low-light conditions. K-9 officers work in the dark inside buildings or outside on track, and yet incredibly, I still meet K-9 officers who tell me their departments prohibit this gear. We owe it to our officers to give them the best tools and training.

Additionally, top instructors nationwide are teaching the use of the light as a fighting tool. If your adversary can t see you because you ve used light to temporarily blind or disorient him, you gain the advantage. You may avert a deadly force incident with superior tactics that include the light.

I resisted lasers for many years because the early models I used did not maintain zero. The current models I have tested do so. So, when the situation does not allow use of the traditional sights, iron or optic, the laser can stand up to the task. For the SWAT or patrol-shield user, or during close-quarter battle (CQB) room entry, the laser adds another option for fast target acquisition.

The laser is not a substitute for learned skill. It s an option for skilled users who have developed beyond the basics. It doesn t allow you to shoot better, but it may allow you to move on target faster.

I ve read the reports of those who directed a laser on an offender, causing the offender to surrender. Conversely, officers in central Illinois were saved from an ambush because the offender s handgun-mounted laser reflected the laser light on the bushes in which he was waiting. The officers gunfire was first and definitive.

All gear can be a two-edged sword. What you use can be used against you. Again, it matters so much what you see, where and when you see it, and how you use your gear.

So, I continue my search for gear that works. What we use for our fighting gear must be attached to us easy on, easy off. It must be durable, dependable and work each and every time. In lights, it must endure and run for long periods.

Over the past year I ve tested several new lights and lasers to see if they fit this description. The Streamlight TRL1 and TRL2 are the new metal-body versions that have evolved from the plastic M-3 and M-6 models. The Ts use LEDs that are very bright and well focused, unlike the older, diffused beams. They also will withstand dropping and harsh treatment in the field and continue on for hundreds of hours of use.

The laser-sighting component of the T2 model brings to the officer an additional sighting tool. I found the 80-lumen T2 white light could fill the range area with light 60 yards deep by 30 yards wide with an intense visible corridor 10 yards wide to the deepest part of the range. This is tremendous lighting from such a small unit.

The laser reached as far as our Larue steel rifle target set up at 300 meters. I m not suggesting we would use it as a sight at such distance, but it was visible and could be used as a marking designator.

A second year-long test item is the amazing postage-stamp size LMS Uni-Max LaserMax laser sighting unit. I first saw the LaserMax unit at the 2006 ILEETA Training Conference and was given the rundown by friend Marshall Schmitt. Schmitt is a long-time law enforcement trainer and one of the best men in the industry. He knows lasers and lights. Soon after, I received a production model and mounted it to my Smith & Wesson M&P-15 patrol carbine on a set of SureFire rail handguards. After much range testing and carry, I called Schmitt and told him I would test the concept at the May 2007 National Patrol Rifle Competition (NPRC).

One evolution of fire at the NPRC took place inside a dark shoot house. Light and laser were my tools for that portion. I mounted the LaserMax to the right side of the rail for fast on/off activation by my support-side hand. (Also, I could not mount it below the handguard because it would be obstructed forward by my underbarrel-mounted white light.)

This presented several issues. First, it offset the laser after it passes the point of impact. Because the laser travels in sideways instead of coaxial to the bore, any distance beyond point of aim and point of impact puts the laser point to the side of the bore. I set my zero for five yards, so at 10 yards, this setup would put me off target to the right.

Second, the sling could fall in front and block the emitter. A later solution in the form of an attachable light/laser mount directly in front of the forward sight assembly and close over the bore came from world class gunsmith Ned Christiansen at Michiguns. (For those of you looking to mount a light/laser unit low to the bore where it works best, Christiansen has the answer.)

The NPRC was a great event and learning experience. Inside the dark CQB environment, the LaserMax, combined with my SureFire 661 rifle-mounted white light, proved effective. With white light I located and identified the deadly force threats. With the laser I was on target immediately and engaging. My error was moving too fast, but the gear worked. I finished the competition on a high note, and left with some good loot and an appreciation for this advancing technology.

Quality lights and lasers are affordable for the average officer. You can get a lot for under $200. For a bit more, you can get the combined units. These durable units will last years in rough and continuous service. I ask you, what is your safety worth? One overtime shift pays it off.

I ve changed my thinking and come to believe that the weapon-mounted and dedicated light and laser may well become the standard. Before using them, officers must first master the basics of fighting skills with bare steel. All devices fail, and you must be up to working with your iron sights. But the end combination of lights and laser sights is a compelling upgrade for those officers working the tough streets on the sharp point of the spear.