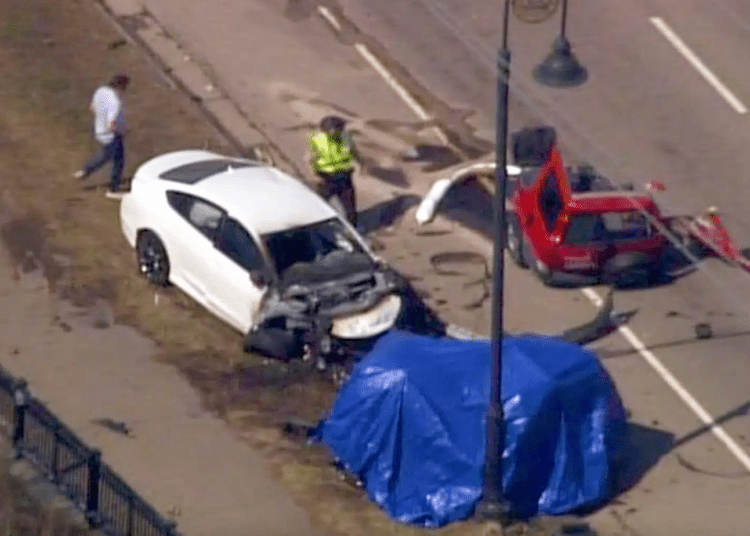 A photo of the crash scene provided to Alpha News.

DAKOTA COUNTY, Minn. – A young man who was 80 days shy of his 18th birthday when he killed Dalton Ford and his girlfriend Tayler Garza was placed on probation until the age of 21, according to ​Dakota County Attorney Kathy Keena.

Leon Bond, now 19, pleaded guilty to two counts of third-degree murder in connection to an April 4, 2021 car crash. Bond was drag racing his sister, Camille Dennis-Bond, when he struck Ford’s vehicle, killing him and his girlfriend.

Bond was sentenced on Monday by Judge Christopher Lehmann. According to Keena, Bond received an adult sentence of 150 months in prison on each count to be served consecutively for a total of 300 months, but execution of the adult sentence was stayed. Instead, Bond was placed on juvenile probation until age 21 with several conditions, including a long-term placement at the Red Wing Correctional Facility, Keena said.

Keena’s office attempted to certify Bond as an adult, but that motion was rejected by Judge Joseph Carter. The Minnesota Court of Appeals affirmed Carter’s decision.

“What’s it going to take? Clearly, the system is flawed,” Ford’s mother, Veronica, told Alpha News in an exclusive interview this month. “Dalton and Tayler deserve to have justice.”

The Ford family’s story made its way to the Minnesota Capitol, where Rep. Walter Hudson, R-Albertville, is proposing changes to the juvenile justice system.

“After you turn 18, another problem is the criminal record as a juvenile is not impacting sentencing as much as they should when it comes to crimes committed as an adult. Maybe we say your juvenile record is sealed until the first time you commit a violent crime. At that point it’s wide open and you’re accountable for all of it,” Hudson told Alpha News.

Bond was on probation for assault and theft at the time of the crash. His sister was convicted of two counts of third-degree murder and two counts of criminal vehicular homicide. She will be sentenced on March 24.