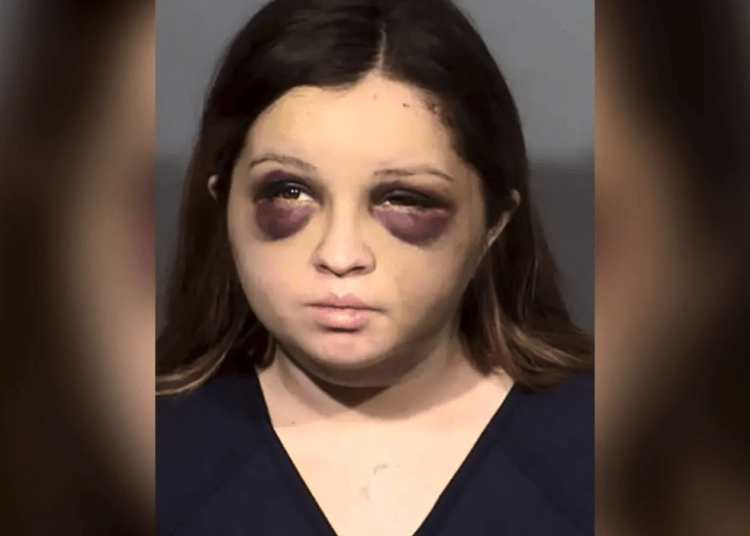 LAS VEGAS – A Las Vegas woman was taken into custody earlier this week after she reportedly tried to smother her “evil” newborn on the way to the hospital.

According to police in Las Vegas, Ashley Hollingsworth, 22, faces one charge of attempted murder and child abuse, KLAS reported.

Hollingsworth’s aunt and uncle told police that the woman gave birth quietly in the guest bathroom and that they found the baby girl in the toilet last Saturday.

The family headed to MountainView Hospital, but the uncle told police that on the way, he heard the baby stop crying and found Hollingsworth squishing a blanket over the girl’s face.

Police wrote in the arrest report, “Ashley had wrapped [a] blanket around the baby’s head and was pushing the blanket against the baby’s face.”

The uncle said Hollingsworth did this at least twice before he took the child away, according to the Las Vegas Review-Journal.

“It was later learned that Ashley had attempted to kill the baby by smothering her with a blanket while enroute to the hospital,” police wrote in the report.

Upon arrival at the hospital, Hollingsworth refused to enter the emergency room because she was “bleeding profusely,” the New York Post reported.

Hollingsworth fled the area after dropping off the baby, but was located about two hours later with head and face injuries. She told police she was “beat up by a rock,” according to the Las Vegas Review-Journal.

The woman was taken to University Medical Center and interviewed again on Tuesday. She told investigators that she had two other children, born in 2018 and 2020, who lived with another father in California.

Hollingsworth had been diagnosed with a medical condition that was redacted from the arrest report. During her pregnancy, she said she was not taking her medication.

According to the report, she “continuously talked about prophecies and other religious ideations.”

She reportedly told police there was “something evil” in her stomach and was trying to kill it.

The baby’s father, who traveled with Hollingsworth, brought the baby to the hospital staff for treatment.

According to authorities, MountainView doctors initially believed the baby suffered a brain bleed. However, the diagnosis miraculously showed the baby didn’t sustain any injuries from the horrifying incident.

Hollingsworth’s injuries are reflected in her booking photo, which showed the woman with two, large black eyes. She is being held without bail and is scheduled to appear in court on Monday.