Kim Potter's best friend sat down for a conversation with Liz Collin to discuss Potter's life in prison, the push to get her sentence commuted, and more. 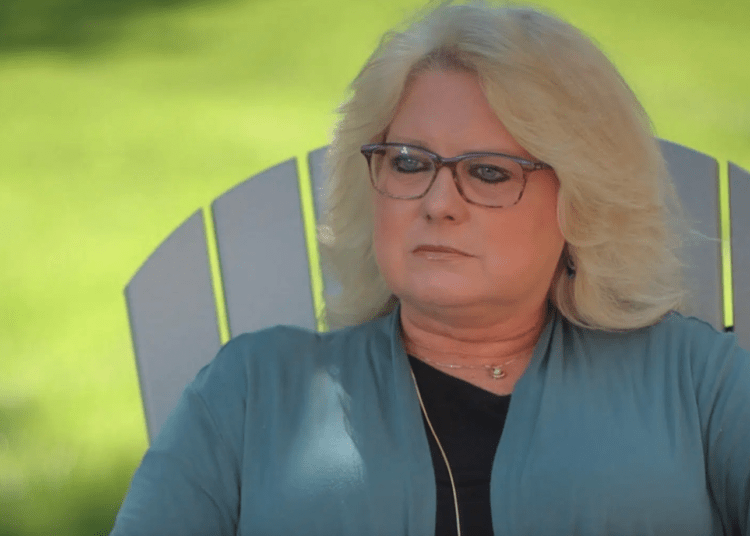 It’s a countdown clock Becky Boie wishes she didn’t have to track.

“224 days,” she replied quickly when asked how long it will be until her best friend of more than 20 years, Kim Potter, is released.

She refuses to keep track of the days that have passed since Potter was sent to prison.

“I try not to look at that because it breaks my heart. But it’s one day too many,” Boie said.

For months, Boie has been leading a phone-call and letter-writing campaign to Gov. Tim Walz, urging him to commute the former Brooklyn Center police officer’s sentence in the death of Daunte Wright.

Potter was convicted of manslaughter in December.

“Well, we’ve been ghosted, basically. You know, the efforts with the letters are still continuing to the governor’s emails,” she said.

Boie said she got one call back from Gov. Walz’s office and a generic email denying Potter’s supporters a request for a meeting.

Boie displays her support for Potter with a “KP” bracelet. (Alpha News)

Potter is behind bars at the Shakopee women’s prison serving a 16-month sentence. Boie said they have confirmation the Board of Pardons has received Potter’s application for a commutation. However, the board’s fall meeting won’t take place until December, meaning the possibility of an early release remains up in the air.

“The website says the hearing is supposed to take place in the fall. Well, if it’s December, then that’s winter, that’s not fall,” Boie said. “Which is convenient because that will happen after the elections.”

Minnesota’s governor, attorney general, and Supreme Court chief justice all serve on the Board of Pardons. They must unanimously approve commuting any sentence.

A board spokesperson told Alpha News the upcoming elections did not directly affect the dates of the fall meeting, now scheduled for Dec. 19 and 20, adding that it’s not unusual for the fall meeting to be held in December as they have the past three years.

The board will decide a month prior which applications will be considered during the meeting.

No matter what November’s election may bring, Gov. Walz and Attorney General Keith Ellison will still act as voting members of the board during the December meeting, since election winners aren’t sworn in until January.

Gov. Walz did not respond to a request for comment on the situation.

Boie pointed to Attorney General Ellison’s own words from Potter’s sentencing on Feb. 18 as reason for an early release.

“Ms. Potter could make a powerful contribution. She could have a profound impact on police officers, departments and manufacturers about the urgency of ending weapons confusion and saving lives. It will be up to her to show that she can do this with true remorse and make true amends. I hope she can,” Ellison said in a statement at the time.

“She can. She can’t do it right now while she’s sitting behind bars. So what is the point of keeping her there when this is what he wants her to be doing? Give her the opportunity to get out and to do some of these things,” Boie said in response.

Attorney General Ellison’s opponent, Jim Schultz, has said in the past that he would support commuting Potter’s sentence if elected.

Alpha News asked Attorney General Ellison’s office if he would do the same.

Boie said “actual criminals” have been released by essentially the same people because of COVID-19 and overcrowding in prisons.

“It makes my blood boil. It’s in the last year and a half. I cannot remember what the number is exactly, but it was hundreds — actual criminals who have been released due to COVID, due to overcrowding, I mean for a number of reasons. And it’s this administration that is releasing them,” she said.

As a former crime prevention specialist for the Brooklyn Center Police Department, Boie admits it’s been difficult to watch her old department fall apart. The department is down more than 30% of its officers from April of 2021, fighting record crime with far fewer resources.

“I guess in my eyes, when something like this happens, I think it’s appropriate, or would have been appropriate, that the Brooklyn Center mayor, council and whatever other uppity-ups could have come to the rest of our department. ‘Sorry this happened. This has to have a profound effect on everybody.’ But there was none of that,” Boie said.

“Their choice was to bring activists in to figure out how many people they could fire and how they could rearrange the police department to their liking. That to me is not a solution. We’re not in any better place than we were. Stop playing the politics. Start playing the people,” she added.

Due to ongoing COVID restrictions at the prison, Boie has only been allowed to see Potter once in-person. She’s also one of several to have shown support for Potter outside the prison in months past.

Potter remains segregated from the general population for safety reasons.

“The human contact she gets is very, very minimal. There’s been a couple people that have figured out who Kim is and have completely berated her and said horrible things. Another woman just kind of made a comment to her through the door and said you don’t deserve to be here. So now you know you’ve got other prisoners telling her she shouldn’t be there,” Boie said.

Boie with Potter early in their careers. (Alpha News)

But Potter is coping as best she can and has heard from supporters around the world. Still, Potter seems most concerned with other people, Boie noticed during a recent phone call.

“So these women are coming in for whatever they’ve done in general population. But our conversation was about their mental health and how what can she do when she gets out to maybe help these women so they’re not going back to abusive relationships or the same environment that they were in. I’m like, this is Kim. You’re sitting there in the most horrible situation that you could be in, and you’re worried about the other women in that prison. You know that that’s just who she is,” Boie said.

“I don’t understand why she has to stay there until April, when she could be doing so many good things out there for everybody to see,” she added.