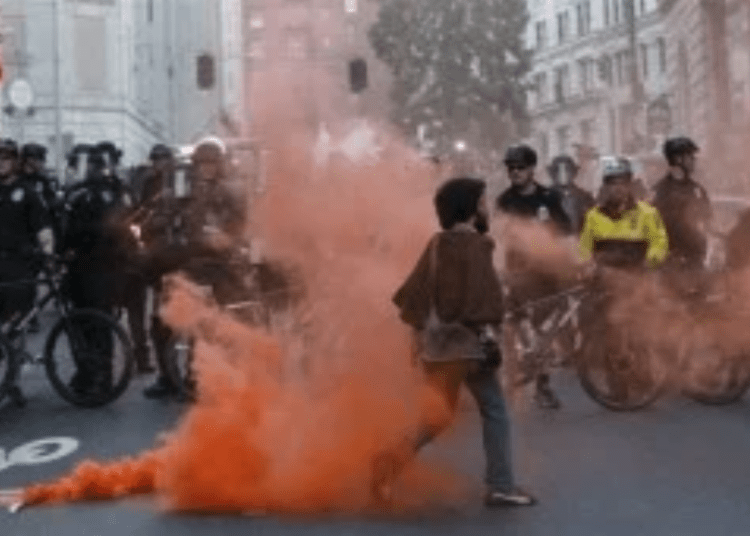 A federal judge has found the Seattle Police Department in contempt of court for the use of pepper balls and pepper spray during Black Lives Matter protests in recent months.

According to Fox Seattle, U.S. District Judge Richard Jones issued a 27-page order Monday in response to a motion by Black Lives Matter Seattle-King County to find the police department in contempt of his earlier injunction barring police from using force against peaceful protesters.

Appointed by President George W. Bush in 2007, Jones found four “clear violations” of his order: one involving the use of pepper spray and the other three involving blast balls, a grenade-like device that explodes and spews pepper gas, The Seattle Times reported.

After 31 years as a city of Seattle resident, I moved my family to Kirkland, two years ago. Better schools, police response, no homeless, lower taxes, much lower crime, etc.
All this Seattle decline is Mayor Durkan and the Seattle City Council. Shameful, it was a great city.

“Of the less lethal weapons, the Court is most concerned about SPD’s use of blast balls, the most indiscriminate of the four” crowd-control weapons he examined. “SPD has often hurled blast balls into crowds of protestors” when no immediate threat to the officers’ safety or public property could be identified, the judge found.

“Some might say that four clear violations — out of four days of protests and countless uses of less-lethal weapons — must surely be insufficient to ‘vitiate’ (spoil) the City’s otherwise substantial compliance,” Jones wrote. “But this is misguided.”

The injunction was issued after Jones found that SPD’s use of tear gas, pepper-spray and other crowd-control weapons were unconstitutional and that the department had violated the rights of thousands of Seattle protesters in large, early protests after the police killing of George Floyd in Minneapolis on May 25.

The police department agreed to restrictions intended to prevent further violations in an initial injunction, and then agreed to refinements — including not targeting reporters and medics — after mass protests in June and July, including the abandonment by police of their East Precinct and the temporary formation of a police-free Capitol Hill Occupied Protest, or CHOP, zone.

The protests Jones reviewed for Monday’s findings were held on Capitol Hill on Aug. 26 during a memorial for BLM demonstrator Summer Taylor, who had been hit and killed by a car during a freeway protest on July 4th.

Citing pending litigation, the Seattle Police Department did not comment on the ruling.

Share and speak up for justice, law & order...
Tags: contemptjudgeNewspoliceseattle