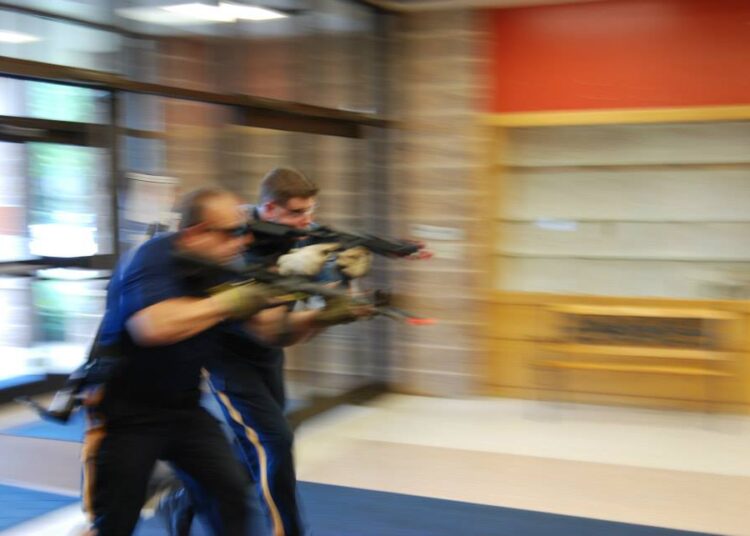 In 2015, Tulsa Police Major Travis Yates had never heard of Jersey Tactical. The small company out of Lopatcong, New Jersey was operated by two full time police officers and SWAT leaders. John Dapkins and Nick Klementowicz had invented a 30-inch Claw that quickly became popular with firefighters and SWAT personnel.

Dapkins and Klementowicz never had the intent to start a business with their initial mission simply to “make something that wouldn’t break.” Using years of their own research and personal funds along with real-time feedback from users, the pair of crimefighters did just that.

The now patented product had one demand for the manufacturer; make a breaching tool that could never break under “human strength.” Not only did they achieve that milestone but they designed the “JTC” Claw specifically for patrol. According to John, regardless of our assignments or our SWAT jobs, we continued to believe in the mantra “Patrol For Life” and what we wanted to do with the Jersey Claw was to take that saying and ensure that it meant “Patrol to Preserve Life.”

“Our thought process throughout the design and our training was that patrol is always first on the scene so we knew that we needed to do everything that we could to get these in the hands of patrol officers,” John told us.

In their classes, the passion of Jersey Tactical is clear. Regardless of the weapons or the preparation anyone has done to combat an active shooter, they say that “If you can’t get in, you can’t save anyone.” 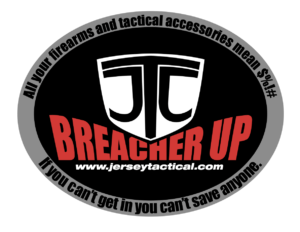 With hundreds of lives saved since this inventing duo began, John says the majority of patrol officers still do not have the equipment needed to breach doors and convincing agencies to provide tools typically designed for full time breachers has been challenging. John describes it as always being an “uphill battle” and it may have taken years for the full-time cops and part-time inventors to convince law enforcement why it was needed but a chance meeting with Tulsa Police Corporal Jason Muse may be turning the tide in the profession.

Muse had been a Tulsa police officer for a decade and a longtime member of the SWAT team. In 2013, he just returned from a breaching school when he began searching for breaching equipment for the SWAT Team.

“The thought of active shooter response wasn’t even on the radar at that point. I was simply looking for the best tools on the market for our team and came across Jersey Tactical,” Muse tells us.

John agreed to sent Jason their Claw for testing. The Tulsa officer quickly put it to work.

Muse said that he spent a year using the tool and quickly became convinced that it wasn’t just a tool for tactical units but for every police officer.

“Traditionally, these tools were big and bulky and really designed for rescue operations only, so it never made sense that a patrol officer would carry one or even need one,” Muse lamented.

Through his testing, Muse saw that the shorter tools combined with the lighter weight, distributed throughout the device, made it possible for an officer to sling it while still being able to utilize other weapons.

“The Jersey Claw was weighted on one end, and it had more surface area for prying in doors, with more strength than I had seen before. It was clear that it had a host of features that made it very practical for patrol,” Muse said.

The idea was born in a police officer to place these tools in the hands of patrol officers but as Jason said, an idea is one thing and making it happen is quite another.

In 2014, Muse asked and was rejected for the funds needed to buy some of the devices for patrol, but in 2015 he had a new commander that was known for doing some innovative work.

“So often law enforcement waits for a problem before they act but Major Yates had a reputation as a proactive commander looking for ways to get ahead of the profession so I decided to go for it again,” Muse told us.

Muse barged into Yates’ office and pitched the idea to place the tools from Jersey Tactical with patrol officers.

Muse didn’t know if his appeal to the new commander would work and, at the time, the thought of placing anything that is traditionally used by SWAT teams with patrol officers was “pretty much a foreign concept.”

Muse left Yates’ office with a promise to “look into it” and while Muse had certainly heard that before, he was hopeful.

Yates, a former ILEETA Trainer of the Year, had always been outspoken about providing officers with more training and more equipment but this request may have been too much, too soon.

Yates, a longtime contributor, and trainer here at Law Officer, tells us that while he didn’t know much about the equipment, Muse “was convincing.”

“I think we complicate leadership way too much. By the time we conduct extensive background checks, train officers for many months and give them a weapon on their hip with the tremendous responsibility of making life and death decisions each and every day, I think their opinion should matter and Jason very passionately convinced me that this equipment was needed in patrol so that was pretty much all I needed to hear,” Yates told us in an exclusive interview.

The problem, as Yates said, was finding the funding for an item that wasn’t in the budget and that was seen as a “luxury” item by many that wasn’t necessarily needed by patrol officers.

At the time the Department of Justice had banned a ton of equipment from receiving grant money that they deemed “military equipment.” While President Obama’s talking points were always that cops don’t need tanks, Yates had just been turned down for shields a year earlier because it was on the ban list from the DOJ for receiving federal funds.

Fortunately, Jersey Tactical was able to classify their Claw as a “rescue item” and Yates was able to find the funds to purchase equipment for 25 patrol officers.

Not having enough for every officer in his division, Yates wanted Muse to train the entire division and spread the devices around where every shift and area had at least one to access.

The following year, the Tulsa Police Department purchased 50 additional devices from Jersey Tactical and spread them to the remaining patrol divisions, ensuring that when a police officer needs to gain access to a room, they don’t have to rely on anyone else.

Muse said that many officers didn’t really know why they needed them but that was then, and this is now.

Following the tragedy in a Texas school building, where officers reportedly could not access the room where the shooter was until they got a key, every agency in the country is now looking for ways to do what Tulsa did years ago. That decision, led by the passion of Muse and the leadership of Yates, helped them enter several doors this week while searching for other suspects and victims in an active shooting event at a Tulsa Health Clinic.

If we have learned anything in the last couple of decades in regard to active shooters, is that you can’t wait for tactical teams when lives are immediately at risk and Muse was years ahead of that thinking.

Yates, the author of The Courageous Police Leader, wouldn’t speak to us about the Texas shooting but he told us that any problem that occurs in law enforcement can be directly tied to bad leadership.

“Law enforcement has always been plagued with a lack of training and lack of equipment and we always seem to wait for a horrific tragedy to look at change,” Yates continued, “You would never find success in business without the proper equipment. They deal with profit and we deal with the lives of citizens so it’s time that we step up.”

Yates said that leaders and particularly politicians love to use law enforcement as the “scapegoat” when something goes wrong “but my question has always been, where were they before it went wrong?”

Yates tells us that Muse and his determination should be a model for all officers and agencies.

“This isn’t about me. This is about law enforcement professionals like Jason Muse who is committed to becoming the best they can be in their profession and doing everything they can to provide those around them with the best training and tools to succeed,” Yates said.

“I simply had the institutional authority to make it happen but it happened because of one police officer in one city and that began a change in mindset and tactics across the profession.”

Indeed, Muse, who is now a patrol lieutenant, continued his evangelism and has spoken to hundreds of officers and dozens of agencies since that fateful day he walked into Yates’ office.

John has seen the difference that Muse has made, saying that he routinely runs into cops that contact him because of Muse but more importantly, John describes Jason as a “good friend and a better guy.”

“Jason cares and he is as passionate as we are but more importantly, Jason Muse became a cop for the right reasons and he has been one of our greatest allies in ensuring that when horror occurs, patrol officers are ready for battle,” John told us.

For Jason, another battle was fought on Wednesday afternoon after an active shooter went into a Tulsa Health Center, killing three citizens. Jason, his team and countless officers were there in minutes and the Jersey Claw was there, ready to open any door that was needed.

Indeed, “Patrol to Preserve Life” is alive and well in Tulsa, Oklahoma thanks to Jersey Tactical and one cop that never gave up.