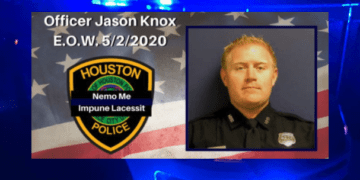 The pilot, Senior Officer Chase Cormier survived and is out of surgery 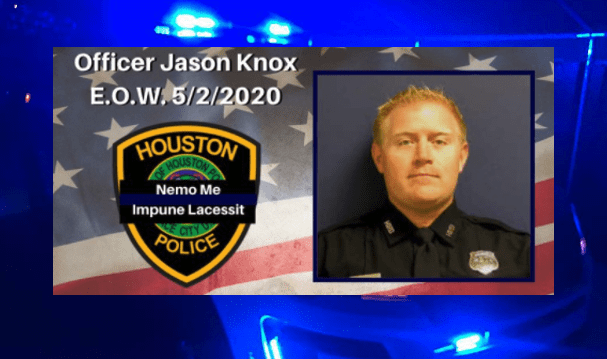 HOUSTON – Chief Art Acevedo of the Houston Police Department identified Jason Knox, 35, as the tactical flight officer involved in the helicopter crash who later died at the hospital. He was the son of Houston councilmember at-large Mike Knox.

“If someone would have told me, a few hours later, we would have an aircraft down,” Acevedo said. “We would lose a really good man. I would have said no way.”

It is with heavy hearts we mourn the loss of ⁦@houstonpolice⁩ Tactical Flight Officer Jason Knox.

Our thoughts & prayers go out to his wife, two young children, his parents, ⁦@MikeKnox1Hou⁩ and Mrs. Knox, his extended family, colleagues & friends. pic.twitter.com/5h8SfzXJX5

HPD also asked for prayers for Senior Police Officer Chase Cormier, 35, who was airlifted to Memorial Hermann hospital and went into surgery Saturday morning. Acevedo said the pilot was “very banged up.” At a news briefing Saturday afternoon, Acevedo said Cormier was out of surgery and conscious.

According to HPD, Cormier was sworn in as an HPD officer in July 2006. He is currently assigned to the Air & Marine Divison. Cormier has been with the air support unit for three years.

HOUSTON – A Houston police officer was killed and another critically injured when their helicopter crashed as they were responding to a call early Saturday morning, according to officials.

The officers became trapped inside a department chopper after it went down around 2 a.m. near an apartment complex on the north side of the city. The officers had to be extracted by the Houston Fire Department, FOX 26 in Houston reported.

It happened while the officers were responding to a call about bodies being seen floating in a bayou.

Later Saturday morning, the mayor of Houston asked for the community’s support for the family of an officer who died in the crash. “This is a sad morning,” Mayor Sylvester Turner said.

“This is a sad morning.”
Mayor Sylvester Turner asks the city to lift up the family of a @houstonpolice officer who died in a police helicopter crash earlier this morning. pic.twitter.com/4RBmmzSjGm

“They literally had to cut the pilots out of the wreckage,” Houston Police Chief Art Acevedo told reporters at a news conference soon after the crash.

The pilot was still in surgery, Acevedo said, and was “very banged up” but police were hopeful he would survive.

“We don’t have any idea why it went down at this time,” Acevedo said at the first press conference, near the north Houston crash scene, and reiterated that later in the morning, Fox News reported.

Although the officers in the helicopter were responding to assist with a search for bodies floating in a nearby bayou, Acevedo characterized the tip as “probably a bogus call — we don’t know.”

The cause of the crash was under investigation, according to FOX 26.

The officers have not yet been publicly identified. Acevedo said police had picked up immediate family members and taken them to the hospital.

There were no other injuries reported.

Moreover, the chief noted that shots rang out across the street from the complex around 3 a.m., while police were investigating the crash.

Six people were taken into custody and no injuries were reported, he said, updating the number of people from three. Acevedo stressed that police had no information indicating the helicopter was taken down by hostile action.