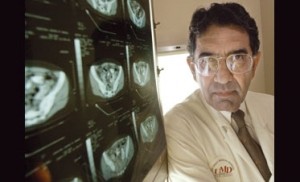 Investigations: The Truth's in the Teeth

Investigations: The Truth's in the Teeth

During my career as a detective, it was not uncommon to see bite marks on rape and child-abuse victims. However, I encountered only a couple of occasions where forensic dentistry or bite-mark evidence was associated with a murder case. Both cases took place long before DNA or dental evidence was an established investigative tool.

In the first case, trash haulers discovered a body in a dumpster behind a city housing project. The victim was a well-known prostitute who had been strangled and then wrapped in large, plastic trashcan liners. When we examined her body at the autopsy, we found her assailant had bitten her many times around the breasts and buttocks. We photographed the wounds and measured the length, width and depth of each bite mark, but we really didn t consider the bite marks to be of significant evidentiary value other than to indicate modus.

The second case involved an elderly woman who lived in an assisted-living apartment complex. When a foul odor began emanating from her apartment, the building superintendent let himself in with a passkey and found her tied to a chair in her kitchen apartment. She d been raped and beaten to death. The killer ate an apple while in the apartment. A portion of the apple s peel found on the floor revealed a perfect impression of the killer s front teeth.

By then we had some inkling of forensic dentistry. A local dentist with a great deal of expertise in forensic odontology matched the impression the killer left in the apple peel to a court-ordered examination and impression of his teeth. However, we had a confession from the suspect and never attempted to use the dental evidence as part of the case.

The investigative uses of forensic dentistry have made significant advances since my era. Forensic odontology, also known as forensic dentistry, is the study of teeth, dentures and bite marks for the following purposes:

To connect a bite mark to a particular person;

To identify an individual through an examination of fillings, missing teeth and root-canal work (if a silver amalgam or other type of metal restoration is present, x-rays can be compared); and

To estimate a person s age.

Because teeth are highly resistant to destruction and decomposition, they present useful evidentiary analysis in cases where the deceased individual is not known and/or the body has decomposed. Murderers have used numerous methods, including wood chippers, chemicals, burial at sea or on land, and feeding victims to animals, in an attempt to prevent the identification of a person and cover up their crime. Sometimes the only clues investigators have to go on are parts of a skeleton and teeth. Dental identification of remains is useful in natural disasters, fires and plane crashes, and it was used extensively to identify victims of the World Trade Center bombing. In addition to comparing the deceased s teeth against a known dental record, teeth represent an excellent source of genomic DNA, and even root-filled teeth supply sufficient biological material for PCR analysis.

In a previous column dealing with skeletal remains (March 2006), I mentioned that for aid in identifying the deceased, there are many government databases that collect information and DNA profiles on missing persons and convicted felons. The FBI s National Crime Information Center keeps a comprehensive database of missing and unidentified persons. The FBI also maintains the DNA database CODIS (Combined DNA Index System), which links DNA typing from unresolved crimes with cases in multiple jurisdictions and unknown forensic-typing profiles found at crime scenes. This index also includes a missing-persons index, an unidentified-persons index and DNA profiles from relatives of missing persons, which can be matched with found remains.

Bite-mark impressions are left at the scene of a crime on food, in gum and on a victim s skin. Investigators responding to murders, rapes and child-abuse cases should remain especially cognizant of the potential that bite-mark evidence may play a key role in the case. The operant theory is the same as for fingerprints bite marks can be individualized to a particular person, excluding all others. Like fingerprints, the rule of thumb is the more detail in the impression left by the bite mark, the more likely it can be individualized to a particular person.

Similar to fingerprint identification, the forensic dentist must have something to compare the bite mark to, however. This requires samples of bitten objects from a suspect and the services of a forensic dentist to perform the procedure. I recommend investigators obtain a court order in the form of a search-and-seizure warrant to obtain a suspect s bite marks rather than relying on signed, informed consent. In the likely event forensic personnel collect saliva deposited on or in the victim s skin when the bite mark was made, you may also need a warrant to obtain the suspect s DNA if it s not already on file in a database. Obviously, investigators can use these techniques for living victims as well as the deceased.

In the case of People v. Marx, the California Court of Appeals allowed the admissibility of bite-mark evidence on the rationale that evidence of a scientific test is admissible when the technique has received acceptance by experts in the field. The Mississippi Supreme Court reaffirmed this case in 2003 in Stubbs v. State, finding bite-mark evidence relevant and admissible.

Of course, it remains highly unusual for a small or even medium-sized police department to have a forensic odontologist on call to respond to crime scenes. Even for departments that use the state police or a regional evidence-collection team, this field is so specialized that organizations must make an effort to recruit forensic dentists willing to perform these services. Even large crime labs don t have forensic dentists on staff, and they hire them per diem. Responding to natural disaster and crime scenes, dealing with the dead, testifying in court, etc., is not pleasant work and doesn t pay well. We must often rely on people with special expertise, education and training who are willing to volunteer their time because they believe their skills are meant to be used to serve a greater good. Work with your coroner or medical examiner to establish a link with the American Society of Forensic Odontology (ASFO; www.asfo.org), the American Academy of Forensic Science (AAFS; www.aafs.org) or the American Board of Forensic Odontology (ABFO; www.abfo.org).

If you re a commander or supervisor in an investigative unit, you must obtain these resources and ensure your personnel are trained in the capabilities of the various forensic sciences. In most agencies, detectives and initial responders don t have to know how to process the evidence (specialized personnel do that), but they do have to know how to recognize the evidence and understand how it can be used to solve crimes.