Raul Cuen and Frank Nanez were identified as the deceased inmates. Both were incarcerated for murder. 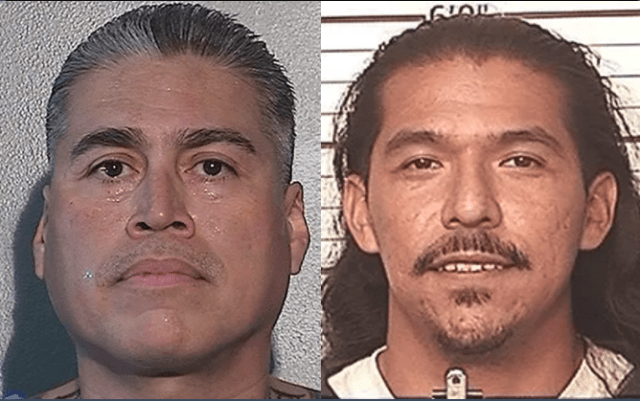 Inmates Raul Cuen, left, and Frank Nanez were shot and killed while stabbing a fellow prisoner. (California Department of Corrections and Rehabilitation)

SUSANVILLE, Calif. – Correctional officers at the High Desert State Prison in Susanville, California fatally shot two inmates who were stabbing a fellow prisoner with makeshift weapons, authorities confirmed on Wednesday, according to the Santa Cruz Sentinel.

The attack took place about 10:50 a.m. Tuesday at the prison in Northern California. Raul Cuen, 48, and Frank Nanez, 32, were identified as the inmates who attacked another prisoner, Anthony Aguilera, 68, with fabricated stabbing weapons, according to the California Department of Corrections and Rehabilitation.

Cuen and Nanez refused to comply with verbal commands from prison staff to stop attacking Aguilera, the statement said.

Despite a warning shot fired by a correctional officer with a rifle as well as the deployment of chemical agents, the two continued with the attack while ignoring orders from staff members, officials said.

“Staff then fired additional rounds when the attack continued,” the statement said.

Consequently, both Cuen and Nanez were struck by gunfire and died a short time later. Aguilera was hospitalized in serious condition, officials confirmed.

The homemade weapons were recovered at the scene.

Aguilera is serving a life sentence with the possibility of parole for attempted murder, according to CDCR officials, Fox News reported.

Two correctional officers were involved in the fatal shooting. Per normal protocol they’ve been placed on administrative leave during the investigation.

The CDCR sent its Deadly Force Investigations Team to the prison to assist with the investigation, the Santa Cruz Sentinel reported. The team conducts criminal and administrative probes into every use of deadly force, the CDCR said, adding that a board will also review the case.