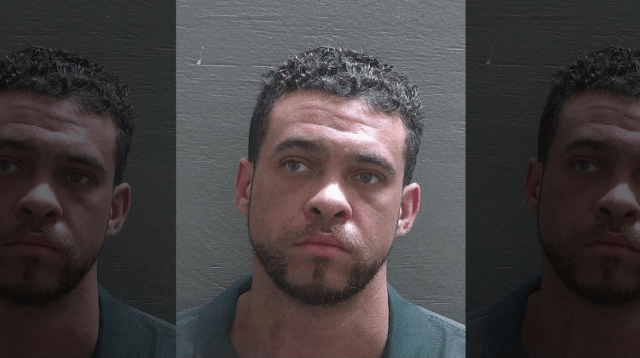 Andrew Ross-Celaius, 37, was found hanging in his jail cell Wednesday but was still alive, according to reports. (Escambia County Sheriff’s Office)

ESCAMBIA COUNTY, Fla. – An inmate who had been jailed on suspicion of “heinous” abuse of a child in Florida was rushed to a hospital Wednesday night after authorities found him hanging in his cell, according to reports.

The suspect is accused of burning the child with a blowtorch, throwing bottles of milk at her and shooting her with an airsoft gun, among other accusations. Furthermore, he reportedly shocked the child with an electric dog collar, the Pensacola News Journal reported.

Authorities say some of the alleged abuse was captured on video, with Ross-Celaius wearing a werewolf mask to further torment the child.

“The level of terror that this child was put through, our abuser would wear a mask, a werewolf mask and the collar that the chief described is a tasing collar for dogs,” Escambia County Sheriff David Morgan said at a news conference Wednesday. “If you want to think of something you could do to a child to terrorize her, this child lived through that.”

The abuse was reportedly discovered when the child’s mother brought the girl to an emergency room, thinking the girl had signs of ringworm on her body. But medical staff informed her instead that her daughter had been burned.

“Throw her in prison,” Mixson’s stepfather, James Clay, told WEAR. He told the station he feared that Mixson would receive a plea deal and end up not serving prison time.

A second suspect, identified as Eric Furnans, 36, has been charged with destroying evidence in connection with the case, the sheriff’s office said.

Morgan said investigators are working to determine if any of the videos had been shared with others over the Internet.

Ross was in protective custody at the time he was found hanging. The method was undisclosed.

Court records show that Ross-Celaius was charged in the slaying of a 6-year-old girl in 2006 but was acquitted, WEAR reported.