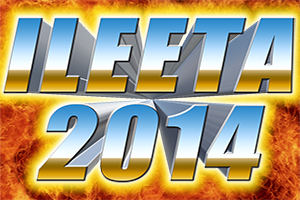 The 11th annual ILEETA conference was, as it has been in the past, the ultimate learning and networking event for serious, professional, law enforcement trainers.   The 2014 conference was attended by 740 law enforcement trainers from all 50 states and eight countries, filling the 18-story Weston Lombard  (West of Chicago) hotel to capacity. Many attendees had to seek lodging at backup hotels in the area.

Many of the classes are taught by the current “who’s who” in law enforcement training, and by those who will soon be stepping up into that category.  However, don’t ever expect to be snubbed by an instructor at ILEETA with a prima donna attitude. In the seven years I’ve taught there, I’ve met only one such self-absorbed individual who taught at one conference. He has not been back since. Everyone checks their egos at the door, and they do everything they can to help the students (instructors in their own right) and the profession.

In the unlikely event there wasn’t a class on something you would like to learn, chances are there’s someone in attendance that could teach you in an informal meeting.

The opening ceremony was well attended, and was highlighted by a phone call from Ed Nowicki, the founder and Executive Director Emeritus of ILEETA. Even though Ed’s failing health kept him from attending, hearing his enthusiastic message to do the best we can was inspirational for all. I’m sure I can speak for all of ILETTA when I say, Ed, we love you and you will be in our hearts, thoughts and prayers forever. Law Officer columnist and author of the recently published, Street Officer’s Guide to Emergency Medical Tactics, Eric Dickinson, was awarded the Law Officer Trainer of the Year.

As usual, my only displeasure with the ILEETA conference is there are far too many outstanding classes running concurrently. Which is like going into a restaurant and groaning that there are too many steaks available to eat them all at one time. It’s not credible criticism. So, I’d like to discuss some of the classes that I attended at ILEETA, at least in part, as I migrated from classroom to classroom trying to learn a little bit about everything.

I’m sure I’ll probably forget someone in this article that I should mention, so let me apologize in advance to anyone I inadvertently leave out. I also need to point out that just because I do not mention a particular instructor or class, does not reflect negatively upon them. With so many classes running simultaneously, I have no doubt that there are top-tier classes offered that I have not attended, or even met their instructors.

Following are my personal highligts.

Scott Hughes’ Warrior’s Edge.  If you have any doubts what-so-ever about the importance of using and reading body language, detecting pre-attack indicators, and professionalism as tools in officer survival training, you won’t after attending this class. Scott did an exemplary job with his presentation, showing numerous real world examples that made believers of those in attendance.

Michael Brave’s, Force Related Policies, Issues, Development and Consequences. I had heard of Michael Brave’s reputation as a top-tier attorney and dynamic speaker, but this was the first time I had actually attended his class. He exceeded all expectations that I held by far. He gave a meticulous, eye-opening class on the importance of maintaining timely, well-written, use-of-force policies. As well as following best practices in training, and he spelled out the potential disastrous consequences for cities, police departments, and officers alike should they fail to do so.

Keith Wenzel’s, The Tactical Leader. Keith gave an entertaining, but no-holds-barred presentation on the importance of the first line supervisor. Using real world examples that graphically highlighted the potential results of failing to lead your troops, this is a class that should be mandatory for all road supervisors.

Jeff Chudwin’s, Police Use of Force-Tactics and Law. Who could possibly be more qualified to teach such a class than a retired police chief, former Assistant States Attorney, and leading tactical expert (ITOA president as well) all rolled into one? With his usual dynamic flair, Jeff kept his audience’s attention with a captivating presentation supported with real world examples captured on video.

Ed Delmore’s, Advanced Criminal Patrol. Chief Delmore’s presentation is an exercise in tactics and precision. He will make a tactical point, and then follow it with specific case law that shows why the officer(s) acted correctly or incorrectly, and gives the audience a solid understanding of what to do, when to do it, and what not to do. For officers that want to dig a little deeper into pedestrian and traffic stops, which can and do develop legitimate, lawful felony cases, this is a must attend course.

Joe “Little Joe” Ferrera, Gunman in the Lobby, Officer Down. On 11-11-2012, the Southfield Michigan Police Dept had a gunman enter the station, which resulted in a brief gunfight that left the gunman dead, and a Southfield Sergeant wounded. Little Joe gave a special evening presentation that was attended by nearly all the ILEETA attendees. Using the lobby video footage, news footage (which included Chief Eric Hawkins giving one of, if not the best ever, pre-investigation OIS interviews to the news media) Joe dissected the engagement, and the actions afterward, into an admirable presentation that discussed the tactics and human factors in detail. The Southfield (Mich.) PD should be extremely proud of the actions of their officers and dispatchers on that stressful day, as well as of Sgt. Ferrera for his work in making this presentation.

For every conference attendee, there is always one presentation that will be particularly memorable. For me at the 2014 ILEETA, it was Ron Scheidt’s, Am I That Man?

Ron’s presentation discussed the impact that instructors, and officers, can have upon their fellow man as life changing mentors and role models. Everyone has the potential to initiate positive, life-changing actions, just by doing what’s right for people you meet.

Ron had several attendees of the class speak about their mentors and role models, one being John Bostain, the 2012 Law Officer Trainer of the Year. John talked about a senior officer who, instead of blowing him off, helped him become a firearms instructor. Had this officer not helped John become an instructor, and opened the door for him to evolve into the trainer he is today. Law enforcement as a profession would have unknowingly suffered a terrible loss.

Conclusion
So in closing this article, I’ll ask of you, what Ron asked of us. What have you done to invest in the future by nurturing and assisting those who could learn from your experiences? Are you that man that makes a positive impact by forging our future generations by investing your time, energy, and knowledge in others?

I can say with certainty that the vast majority of the ILEETA organization consists of such individuals. Please join them. Regardless of your gender, be that man that Ron talked about; help others and mentor those who need it. You’ll never know how many lives you will directly and indirectly influence, in a positive direction.