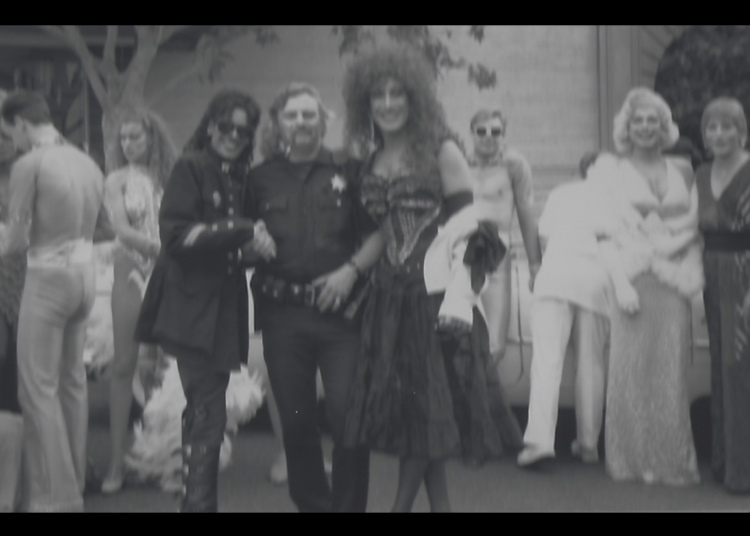 As a cop, working at a fixed-post uniformed check-point job, standing behind a flimsy barricade at a local Faire, or other similar cultural event, was usually deadly boring and tedious.

You always had the same silly questions:

“No, you can’t drive through the drunken crowd on your motorcycle, and I do NOT care where you live, or who you claim to know.”

“No, I will not watch your car (with the engine running) while you go look for your friend.”

Castro Street at this time and place in San Francisco’s bawdy history was a visual and social experience on any Friday Night let alone on All-Hallows-Eve.

I walked a foot beat there for a while during my Beat Cop career. It was interesting, to say the least.  My personal philosophy of Live and Let Live, enforce the law equally and professionally, while keeping your sense of humor ready, was well received by the merchants and the general street population.

After four years as a prior beat cop in the Mission District Barrio where every third person was a crazed heroin addict trying to kill you, and all of the hookers knew you by your first name, dealing with inebriated Flamingo Boys and Drag Queens was actually a semi-relief.

Right then, Castro Street was the Galactic Center of the Gay Universe, until some years in the future, when the AIDS epidemic killed off almost 45% of the population.

Personally, I’ve never had any problem dealing with people who were “different” than myself.

If they were built like a football lineman, (6’4”, 280 lbs.), and were covered in glued-on short pink feathers on top of obscene skin tattoos (and wearing nothing else) but didn’t give me or anybody else any some grief, then as a cop I was okay with that.

My wife, who was also a cop at this moment in time, thought this assignment was hilarious. (She was just glad she didn’t get the posting.)

No obvious weapons, no “outside alcohol,” and you had to have some kind of costume on.

As Mr. Pink Feathers found out, his “costume” was ok, but the REAL gasoline powered chainsaw that he had in his meaty left hand couldn’t get in.

The kid pushing a hand truck with a chilled keg of cheap beer strapped onto it, also found this out to his drunken dismay.

In addition to the triple row of curb-to-curb metal barricades, we had two large dumpsters under our watchful eyes. One was for weapons and prohibited items, while the other collected the beer keg, cases of other alcoholic liquids, and the odd water balloon full of tequila.

Of course, the liquor stores inside the event area were happy as can be to sell you exactly the same stuff that we were confiscating, at only a 25% “Halloween markup” over their usual prices. Plastic cups were a dollar more apiece.

It must have been a Ninja or such season. We confiscated hundreds of swords, daggers, throwing stars, and the occasional battle ax.

Fake or authentic assault rifles were also on our no-go list.

There were several dozen Lisa Minelli imitators, a few Barbara Streisand look-alikes, and a couple of Michael Jacksons in attendance.

You couldn’t tell the players from the spectators without a score card.

The idea of what some people thought was a “costume” also occasionally came into play.

Total nakedness was discouraged, (at least somewhat), so if you were wearing a see-through ankle length Dashiki, with a small black leather jockstrap, and extravagant eye glitter, we’d hardly bat an eye.

To every rule, there is an exception.

Around 11:30 p.m., the eight of us had settled down to leaning on the barricades, taking rotating coffee breaks, and keeping the professional drunks out of the booze-bin.

About every 30 seconds some attendee would crack wize as they passed through the narrow barricade gate:

“Nice outfit you have on tonight Darlin’ ”

“If I show you mine, will you show me yours?”

“Move along Sweet-heart“ (done with my best Humphrey Bogart accent).

Then came the moment that will always have this particular Castro Halloween night etched in my mind.

One of us was always supposed to watch the crowd inside the perimeter, and I’m glad it was my turn.

Suddenly the crowd began moving aside towards the curbs en-mass as a delightful spectacle headed my way.

The collars were connected to a lanyard held in the left hand of a legitimate female Goddess, who like her leashed satyrs was well over six foot tall.

She of course was totally naked except for golden glitter, a domino mask, and a miniscule G string of molecular sized width.

Trust me on this: All of her body was natural, without flaw or surgical enhancement, except perhaps for the below-waist length golden hair flowing over her shoulders.

She was perfection embodied

(And yes, the carpet matched the drapes)

If you were able to notice, she had a VERY large leather whip in her right hand, and every 4 or 5 steps she would stop, crack the whip loudly overt the heads of her troika, and they would (of course) respond with a “Yes Mistress” shout in unison.

By the second whip crack chorus, all of my squad were staring at this apparition to the dereliction of everything else but breathing, and slack jawed admiration.

As she strutted off into the neon gloom of Castro street, I thought we were having another earthquake because of the acoustic thunder that started. Turns out it was a combination of massive applause from the crowd, and some celebratory fireworks at the exact stroke of Midnight.

How that Blonde Goddess timed her entrance that precisely was another topic of debate until we closed up shop at about 3:30 a.m.

Of course, very few of the cops who weren’t at my checkpoint believed us when we told that story at Zukas Bar at 6 a.m. that same morning, but in that I have a pretty reliable photographic memory for faces and such, I didn’t get into that debate.

I just sipped at my gin & tonic and played my entire mental movie over and over in my head.