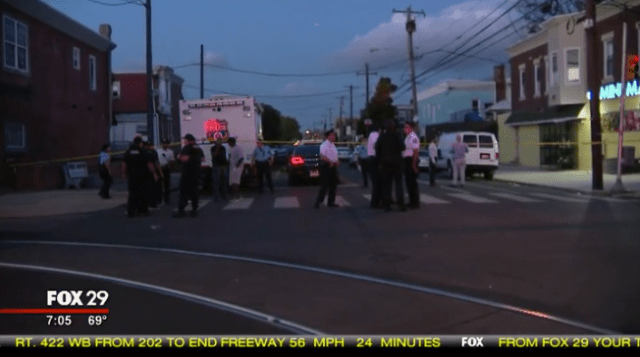 PHILADELPHIA – Philadelphia police on Wednesday were hunting for a gunman who fired at an officer sitting in an unmarked car. This is the third incident in which cops have been targeted in the city over the past three weeks.

The plainclothes officer was conducting surveillance around 7 p.m. Tuesday in the Kingsessing neighborhood when an unidentified man saw him and opened fire, striking his vehicle twice, FOX29 reported. The officer escaped unharmed and the gunman, who is said to have fired 10 rounds, has been described as a black male around 6 feet tall last seen wearing blue jeans and a gray sweatshirt.

“We are disgusted and angered by the reckless behavior of those in the city that have a total disregard for law enforcement and safety in their neighborhoods,” John McNesby, the president of the Philadelphia Fraternal Order of Police Lodge #5, told Fox News in a statement. “Our officers and residents in some neighborhoods are simply under siege by criminals firing high-powered guns and weapons recklessly and irresponsibly.”

Police: Gunman opens fire on officer sitting in car in Southwest Philly. The officer was not hurt. ⁦@FOX29philly⁩https://t.co/bgFGQR5v5F

The shooting Tuesday night in southwest Philadelphia was preceded by an attack last week in which a pair of undercover officers were fired at while canvassing a neighborhood for drugs.

And that incident happened two weeks after a man shot six officers during a chaotic standoff in north Philadelphia on Aug. 14.

“Our officers and residents deserve the support and full-weight of the District Attorney’s office, city and other law enforcement partners to curb gun violence and criminal activity in our neighborhoods,” McNesby told Fox News.

Christine Coulter, the city’s acting police commissioner, said in an interview with FOX29 that the latest shooting “certainly highlights how dangerous the job is whether they know you are a police officer or not.”

“You’re putting yourself in harm’s way when you are out doing investigations. It’s a testament to the men and women who still go out every day and do the job knowing…that there are people who are often willing to fire — whether its police officers or citizens,” she added. “That level of gun violence is what we really need to get to the root of.”