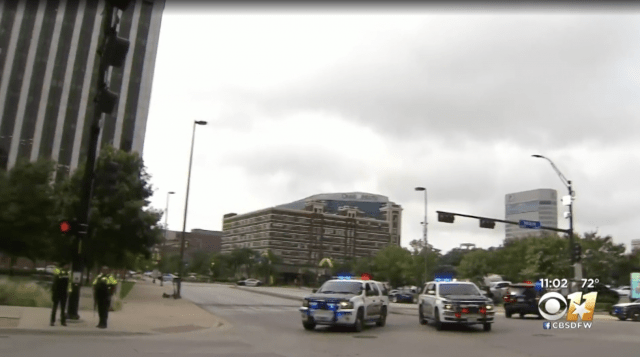 DALLAS – Officials in Dallas have identified the person who they say opened fire at the Earle Cabell Federal Building in downtown Dallas.

The FBI says Brian Isaack Clyde was killed after a gunfight with federal officials outside the building, reported CBS DFW.

Dozens of Dallas Police Department cruisers and emergency vehicles from Dallas Fire Rescue were on the scene after the active shooter situation at the building, which is in the 1100 block of Commerce Street.

FBI Dallas Special Agent in Charge Matthew DeSarno explained at a press conference, “Shortly after the incident began this morning officers from the Federal Protective Service engaged the shooter who was later identified as Brian Isaack Clyde. He was taken to Baylor hospital and pronounced deceased on scene.”

Active Shooter Incident Downtown Dallas: There has been an exchange of gunfire between a suspect and federal officers. The suspect was shot and transported to an area hospital. No officers or other citizens injured.

U.S. Attorney Erin Nealy Cox wanted to calm the fears of those in the area. “The federal building was shot on by an active shooter,” she said. “Law enforcement responded immediately and I want to assure the community, especially our downtown community, that the community is safe.”

Video captured on cell phone by Dallas resident Tim Brown shows a masked person outside, armed with some type of long-rifle, firing near an entrance to the building. The sounds of gunshots can be heard and smoke can be seen coming from several feet away, as the gunman runs across the street into a parking lot and collapses.

Witnesses say authorities performed CPR on active shooter after he was shot by officers outside Downtown Dallas federal courthouse and taken to a hospital pic.twitter.com/bnvZ7Pgje6

“I just saw a burst of people running out and a round of shots,” witness Don Myles told CBS 11. “It was just shots, maybe 10 to 15 shots all rapid shooting, and I just ran across the street into the traffic.”

All of the streets surrounding the federal building were closed as police activity unfolded.

Officials say no officers or citizens were injured during the incident.

Members of the FBI just briefed media on the situation downtown Dallas. pic.twitter.com/g54upNr0xo

Because the shooting happened on government property, the investigation has been handed off to the FBI. The ATF, Federal Protective Service, U.S. Marshals and the Dallas Police Department will assist them.