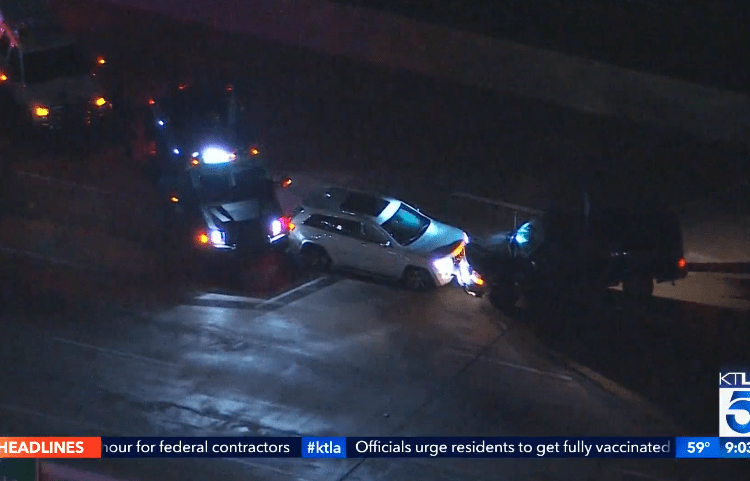 LOS ANGELES — A gunman suspected in three separate Los Angeles area shootings died during an exchange of gunfire with police on the 91 Freeway in the Fullerton area near Anaheim early Tuesday morning, according to the Los Angeles Police Department.

The standoff followed an hourslong chase of a white SUV that police identified in a string of drive-by shootings that left two men dead and a third injured in a span of 30 minutes, KTLA reported.

The 91 Freeway in Orange County was closed in both directions around 4 a.m. as police faced off with the suspect, who was in the white vehicle pinched between an armored vehicle and a police SUV.

Shortly before 5 a.m., officers were seen deploying what appeared to be some kind of chemical irritant into the white SUV, video from Sky5 showed. A SWAT team then approached the passenger side of the vehicle with their weapons drawn. Shortly after, someone from the SUV was seen on the ground being tended to by paramedics and then being covered with a sheet, according to KTLA.

“At one point, the suspect fired at the officers, resulted in an officer involved shooting,” LAPD Lt. Raul Jovel said at a news conference. “The suspect was hit by gunfire and was pronounced dead at scene by the local fire department. That suspect’s body is still here at the scene.”

Officials didn’t identify the suspect, but he was described as being a man in his late 40s or early 50s.

The series of shootings began in Exposition Park near the University of Southern California.

The first of the three shootings was reported at 12:55 a.m. at Figueroa Street and Exposition Boulevard, where the suspect vehicle drove up to a car and fired several shots inside, LAPD said. The victim, a 43-year-old man, was listed in stable condition, though officials didn’t provide information on any injuries.

The second shooting was reported at 1:23 a.m. at a Starbucks drive-thru in the area of 28th and Figueroa streets in University Park. The victim, a 25-year-old man, suffered multiple gunshot wounds and was pronounced dead at the scene, police said.

The victim, who was in a blue Mustang, was a newlywed who was with his wife when the suspect crashed into him and then fired into the car, according to people at the scene who identified themselves to KTLA as his family members.

Surveillance video shows the Mustang backing up as the white SUV hits it then stops alongside it before abruptly driving away.

The third shooting was reported just minutes later, nearby at 7th and Figueroa streets in downtown Los Angeles. The victim, a 30-year-old man, was stopped at a red light in his black Escalade when the suspect pulled up next to him and fired several shots inside, killing the victim, LAPD said.

At that scene shortly after the shooting, a man told a photographer that he was waiting for his Uber driver, only to find out the driver he was trying to reach was the man killed in the shooting. He showed the ride request on the app on his phone. Police did not confirm whether the victim was an Uber driver.

Officials have not identified any of the men killed in the shootings.

When police identified the same suspect in the shootings, it quickly triggered a manhunt throughout the area, according to the lieutenant.

“The officers quickly discovered that it was the same shooting suspect description, a male and a white Cherokee,” Jovel said. “That information was immediately put out to all patrol units in order to stop the violence. The officers realized this was a suspect that was shooting community members, almost at random.”

Officers spotted the vehicle around 1:45 a.m. and went into pursuit. The chase went on for hours until they deployed spike strips, forcing the vehicle to stop as two tactical vehicles boxed it in.

As the suspect refused to surrender, a SWAT team was called to the scene.

Using the suspect vehicle’s license plate number, police found a family member of his and had the person call the suspect to get him to surrender. “Unfortunately that did not work,” the lieutenant said.

“This appears to be random acts of violence and that’s what really got the entire patrol force in the morning looking for this suspect,” Jovel said.

Police said a firearm was recovered at the scene.