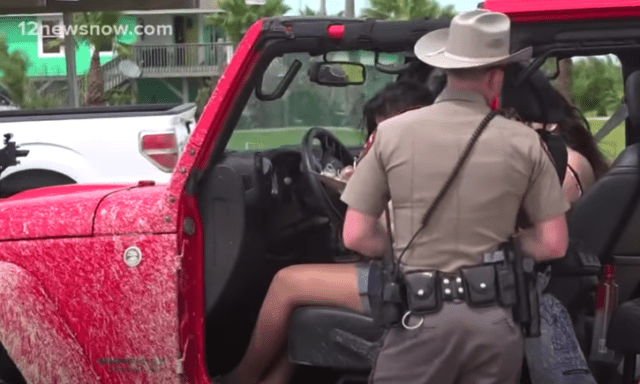 The "Go Topless Beach Weekend" led to the shooting of two individuals, while more than 180 were arrested for various charges. (YouTube)

HOUSTON – Two people in Texas were shot and more than 180 were arrested over the weekend at an event that usually draws thousands of Jeep fans and owners to beaches outside of Houston, police said.

The chaos at the annual “Go Topless Jeep Weekend” in the Bolivar Peninsula comes even as the Galveston County Sheriff’s Office bolstered its patrol for the gathering by adding 40 Texas Department of Public Safety officers, 12NewsNow reported.

“We been in quarantine and like, I need to get out and party,” attendee Chelsey Coyer told the news organization.

During the event, the Sheriff’s Office said a fight broke out Saturday night between two women, and then two men jumped in. The fray escalated when one of the men opened fire, injuring two bystanders who had to be airlifted to local hospitals, according to Click2Houston.

As of Sunday night, authorities reported at least 183 arrests. Those arrested were charged with a variety of public offenses, which included DUI and felon in possession of a firearm, the Beaumont Enterprise reported.

“It’s not our big goal to put all these people in jail but I mean we need to get a point across that we’re not going to put up with it,” Galveston County Sheriff Sgt. Mark McGaffey told 12NewsNow. “We got residents that live here, plus the people who come down here.”

“Basically, come down here and enjoy yourself and have a good time. We don’t have a problem. That’s what it’s about,” he added. “But when you start acting silly, then the sheriff has a place for you to stay.”