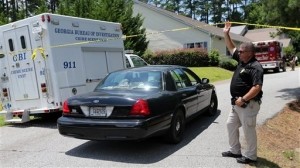 COMMERCE, Ga. (AP) — More than 20 employees of a Georgia assisted living center for people with Alzheimer's disease face dozens of criminal charges after state investigators raided the center on Tuesday and uncovered allegations that employees had mistreated patients, authorities said.

The charges stem from a three-month investigation of Alzheimer's Care of Commerce, a facility about 65 miles northeast of Atlanta, Georgia Bureau of Investigation officials said.

Agents executed a search warrant Tuesday morning to gather evidence at the center. Officials say the probe revealed allegations of physical abuse — such as staff members hitting patients and throwing water on them. Charges filed against the 21 employees include cruelty to people 65 or older, and involve accusations of abuse, neglect and financial exploitation.

Eleven employees were being held in the Jackson County jail as of Tuesday evening, and the facility's owner had yet to surrender to authorities, GBI spokesman John Heinen said.

Twenty-seven people were being treated at the facility when authorities executed the surprise raid Tuesday, Heinen said. Three of them were hospitalized and Heinen did not have details on their medical conditions Tuesday evening.

State officials launched an investigation into the facility after multiple complaints were made by relatives of residents and employees, Heinen said. He added that the initial complaint was filed by an employee.

"Information obtained through the investigation indicated that patients were restrained with bed sheets and subjected to inhumane and undignified conditions to include 'double diapering,' which is a practice whereby multiple diapers were placed on the patients at once to keep the staff from changing soiled diapers as often," the GBI said in a statement.

GBI agents said they also learned that patients were being cared for by people with prior felony convictions that include voluntary manslaughter and identity theft.

It's unclear if employees with criminal backgrounds were hired at the facility after the second report was issued.

Department of Community Health spokeswoman Pam Keene said the agency had been working with law enforcement before Tuesday's raid and had conducted its own investigation of the facility in late May.

"Following the May 21 investigation, DCH monitored the facility on a daily basis until the facility was in full compliance," Keene said in a statement. "The department continued to work with law enforcement and other state agencies so each could fulfill their responsibility to ensure the safety and wellbeing of residents."

Keen said the department will continue working with authorities throughout the investigation.

Three Alzheimer's Care of Commerce residents have died since January. Heinen said the Georgia Bureau of Investigation's chief medical examiner is re-examining the residents' medical records to determine if any additional investigation is necessary. State officials didn't indicate there was anything suspicious about the deaths.

Telephone messages left at the center by The Associated Press Tuesday morning were not immediately returned.

The facility's owner, Donna Wright, was also charged with cruelty to a person 65 Years of age or older; and abuse, neglect, financial exploitation and failure to report under the Protection of Disabled Adults and Elderly Persons statute, authorities said.

It wasn't immediately clear whether Wright had an attorney.