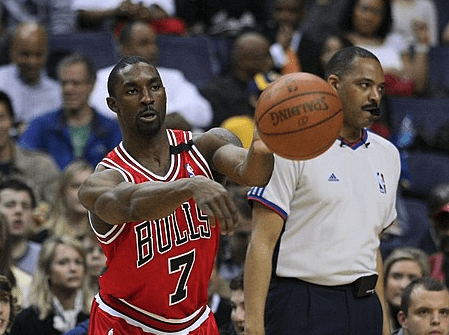 Ben Gordon played for 11 seasons in the NBA. (Wikipedia Commons)

NEW YORK – Ben Gordon, a former NBA standout was arrested Monday evening at LaGuardia Airport in New York after reportedly hitting his young son with such force that he had to be hospitalized, police said.

The 39-year-old Gordon was waiting to board a flight to Chicago at 8:45 p.m. when he was stopped by Port Authority police regarding the allegations. The former ballplayer was apparently non-compliant as he is expected to face charges of resisting arrest in addition to child abuse, according to the Daily Wire.

The child, escorted by his aunt, was transported to Long Island Jewish Hospital to be treated.https://t.co/7W4i4n3rSt

In 2017, Gordon was arrested for robbing the manager of a Los Angeles apartment building while armed with a knife, and driving in New York with a fake license. That same year he was ordered to undergo a psychiatric evaluation after becoming abusive to a woman in a store he owns in Mount Vernon, New York, and locking himself in the restroom.

In 2020, Gordon wrote about how he wanted to kill himself in his final NBA season.

“There was a point in time when I thought about killing myself every single day for about six weeks,” he wrote in the essay for The Player’s Tribune. “This was right after my last year in the league, and I was living in a brownstone up in Harlem.”

“I had lost my career, my identity, and my family all pretty much simultaneously. I was manic-depressive. I wasn’t eating. I wasn’t sleeping.

“It got so bad that they had me committed to a mental hospital, and the problem was that I didn’t even understand why it was happening,” the former basketball star wrote.

Gordon played 11 seasons with four different teams in the NBA, earning more than $84 million before his career was finished in 2015.

Although Gordon was born in London, he grew up outside New York City and played basketball collegiately at the University of Connecticut. He was selected by the Chicago Bulls third overall in the 2004 NBA draft, and later played for the Detroit Pistons, Charlotte Bobcats, and Orlando Magic.