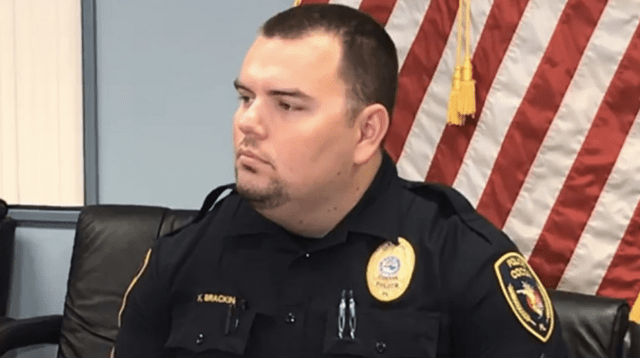 TITUSVILLE, Fla. – People are singing the praises of a Florida police officer for heroically saving motorists trapped in a submerged vehicle.

The officer credited with rescuing two passengers held captive in the sinking automobile deflected the flattery, saying, “When you have the opportunity to do something or save a life, you have to go in and do it.”

Cocoa Police Department Cpl. Kenneth Brackin said he was preparing to shower after returning home from his shift early Wednesday morning when he heard a “loud screeching sound followed by a loud bang.” When he sprinted outside to see what happened, Brackin discovered a car had flipped into a retention pond near his home.

“I could hear somebody banging on the inside of the car while it was underwater,” he said. “I handed the stuff out of my pockets to my fiancé and walked around and jumped in.”

After attempting to open several of the car’s doors, Brackin eventually was able to free both of the vehicle’s occupants. The rescued individuals told FOX35 Orlando the water was about five feet deep. More importantly, the duo said there was only six inches of breathing room remaining inside.

“All I could see was just his face, sitting in the top in the air and trying to breathe,” Brackin said.

Neither person in the vehicle sustained serious injuries, according to police, who hailed Brackin for his “quick response.”

A man who identified himself as the father of one of the passengers also told FOX35 Orlando that if Brackin didn’t act as he did, “we would be making funeral arrangements right now.”

“I want to shake the man’s hand. I’m proud of him,” he added. “We need more officers like him.”

Following the incident, Brackin said, “It didn’t really matter what it took – I was going to get in there and do something.”

“When you have the opportunity to do something or save a life, you have to go in and do it.”

Titusville Police say the cause of the accident is still under investigation.