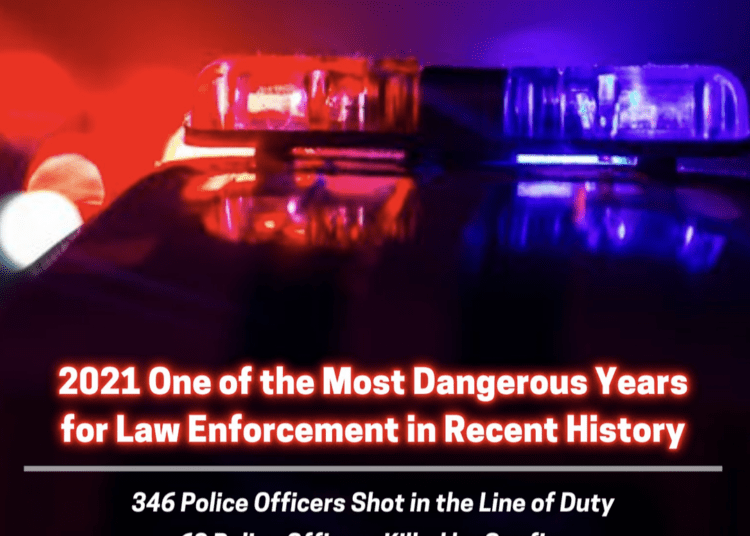 Washington D.C. – Felonious deaths of law enforcement was the highest it has been since 1995, excluding the 9/11 attacks, according to preliminary data released by the FBI this week. The increase comes the same year that saw record homicide rates across the country.

More than two-thirds of the country’s 40 most populous cities saw more homicides in 2021 than in 2020, while 10 of those cities saw record homicide rates. Much of the data is preliminary and it is expected that those records will increase in the coming months.

Gunfire is the leading cause of felonious officer deaths each year and that remained the same in 2021. The FBI has not released its full end-of-year breakdown but reported that 55 officers were killed by gunfire in 2021 through the end of November, up from 39 in the same time frame in both 2020 and 2019.

The Officer Down Memorial Page reports that 62 officers were killed by gunfire in 2021, 5 were killed by assault, 3 were stabbed, and 17 were assaulted by cars.

Author and Trainer of The Courageous Police Leader, Travis Yates, calls the increase in line of duty deaths an expected result of the continued public assault on our nation’s heroes.

“You simply cannot defund police, attack sound training and blame all of society’s ills on the men and women that are standing in the gap of good and evil and not expect the violence to increase,” Yates said.

“We can either sit around and blame others for this awful year or we can get to work on increasing training and public support of law enforcement,” Yates concluded.

What Yates told us rings true. The next time you hear a coward politician attack “warrior” training, keep his words in mind and until those same politicians are facing death on a daily basis, they can lie about something else and leave the fine men and women behind the badge out of their sick and twisted ideology.