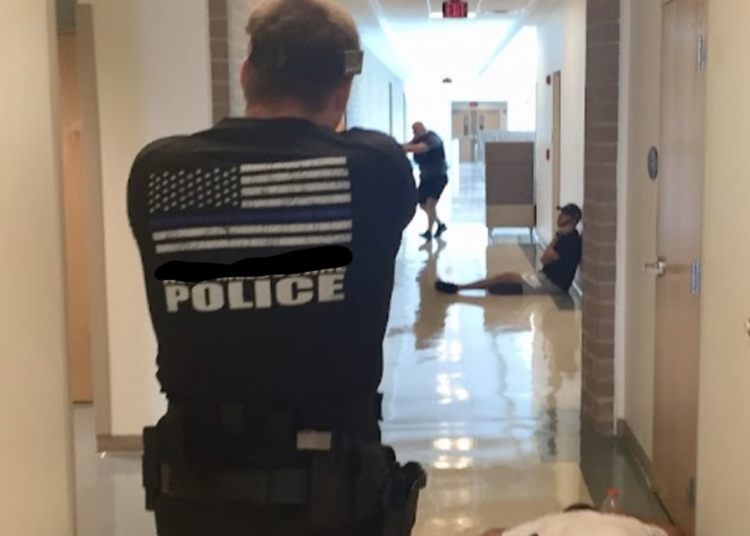 There are no shortage of opinions regarding the Uvalde (TX) massacre where 19 children and two teachers were brutally murdered in May 2022. The knives came out quickly, and may I add, justifiably, against the shockingly abysmal police response to the incident. Most current and former law enforcement officers that I discussed the incident with are perplexed and frustrated with the systemic failures that ensued that dark day in American history. A few, albeit loud, voices are piling this tragedy on a list of police failures to justify their crusade advocating for the defunding of police. I offer the following thoughts from my very limited, yet relevant, experience in observing and attending active shooter training.

A few months ago, I was asked to assist in training police officers and school resource officers (SRO’s) on how to deal with an active shooter situation. Fifty-six law enforcement officers attended the two-day training. The organizers/sponsors of the training are friends that I have known since working as a counterterrorism operations officer for the Central Intelligence Agency (CIA). Thus, it was thought that my experience as a federal officer could enhance the role-playing aspect of the training curriculum. I was impressed by the organizer’s out-of-the-box thinking and was flattered that I was asked to participate.

In the CIA, we received ambush training and other tactical exercises aimed at saving our lives should we experience a terrorist attack while performing our duties overseas. This included weapons training, driving skills and de-escalation methods. Needless to say, I was excited to put some of the lessons learned in my former CIA life to enhance the security of my community in Central Florida.

The police trainees’ ages ranged from the mid-twenties to early fifties. The men and women came from various counties in Florida, and the training was held at a small college campus. Most of them were seasoned officers with years of law enforcement experience.

The officers were fitted with tactical vests that had several quarter-sized, red, IR sensors that were wired to a battery pack attached to their waist. Instructors were issued training guns that emitted a signal that lit up a trainee’s vest and induced a low-voltage shock to indicate when a person has been “shot.”

The officers were divided into small groups and rotated between various “real life” scenarios conducted by a handful of instructors. The training organizers agreed that an active shooter scenario could include one in which a foreign terrorist is the perpetrator. One scenario was amended to have me role-play a Middle Eastern gunman. The instructors opined that this was a realistic situation where a terrorist could target a military base, a shopping mall, or other public venues with crowds of people. What happened next was eye-opening. 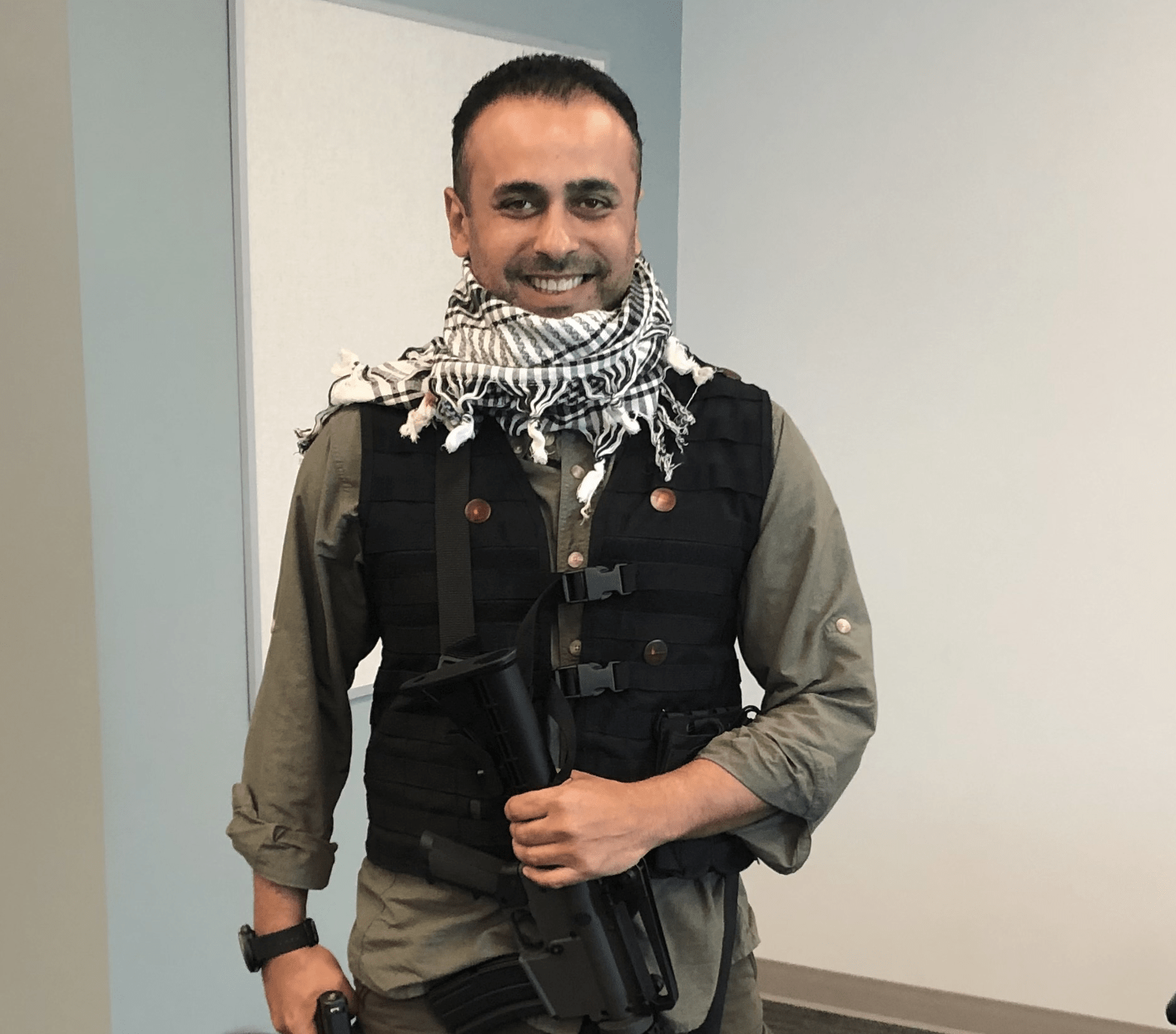 The first trainee was a female officer with 10-years of law enforcement experience. She carefully entered the room I was set up at as a role player. She looked surprised to see me donning a traditional checkered black and while middle eastern shawl (Kufeyah), an AK-47 rifle (a training weapon of course) and speaking in Arabic. I was standing near a dummy that was supposed to resemble a victim that I had ostensibly shot.

Once I started pointing my weapon towards the officer, she gave me the command to put my gun down. When I did not comply and instead pulled the trigger setting off the officer’s IR sensors on her training vest like a Christmas tree, she fired her weapon to stop the threat (me). I was notionally wounded, and the officer proceeded to place me in handcuffs as I laid on the floor.

Gunshots were then heard outside the classroom providing a stimulus for another possible threat. One of the instructors reminded the trainee of that sound due to the auditory exclusion the officer was experiencing. The trainee was told that there could be other attackers in the hallway outside the room where we were and asked her to react. That she did. She walked towards the door to the hallway, used proper cover techniques and neutralized the secondary threat. It was a schoolbook response, except for one important element. The officer never radioed the status of the incident to her colleagues who were responding to the same notional attack.

Instructors interrupted the training, shouting “out of role, out of role.” They brought the officer back to the room for a debrief and asking her to explain her actions. She casually noted, “I neutralized the threat [referring to me, correctly] when I realized there could be more attackers I had to deal with in another room. Then she realized “I should have called it in so other responding officers would not be confused.” Instructors responded affirmatively, stressing the importance of communications. The officer was more focused on the articulation of her own actions, she missed a critical step.

Another officer, a 48-year-old school resource officer, saw me (in the same scenario) and literally started shaking, sweating, and bolted out of the room as if he had seen a ghost. Although this was a training exercise, he later articulated that I looked “too realistic,” and he had never encountered anything like this.

He did not know why he froze.

At the conclusion of the training, it became evident that much work needs to be done. But that is the point of training, right? The second officer clearly made the determination that he was better off leaving the scene. Although he did not engage the threat, he made the right decision to call for backup.

Only a handful of 56 officers who attended the training radioed for backup and provided a description of the threat. Only two knew that I was speaking a foreign language, a critical detail that could escalate the incident and possibly alert federal agencies.

Realizing what they could have done better, some of the officers uttered apologies and expressed frustration/anger at their own actions/inactions. But that isn’t what I was focused on. I was honored to be among the men and women that keep us safe every day. These men and women who are well-intentioned and put their lives on the line each day lacked critical, real-life training. Some admitted to receiving active-shooter training with one or two scenarios in their entire career.

In my CIA small arms training, we fired between 5000-7000 rounds of ammunition in one week to develop what is termed “muscle memory.” This is believed to be effective training for real life situations when science has proven that people’s finer motor skills deteriorate under tremendous amounts of stress. Thus, developing muscle memory enables you to react in a timely manner and make the right choices when subjected to stress.

Police and SRO training should not be treated any differently. They need more scenario-based, hands-on training. Most are not afforded ample active shooter training or how to deal with school shooters. We do not live in a perfect society. Many mistakes have been made; however, I am convinced that we can fix what is broken.

But training requires funding. The less funding they have, the worse the law enforcement response will be.

As a former CIA operations officer, I cannot help but think about how our foreign adversaries gloat with joy when they see us divided. We must unite and not allow our enemies to exploit our weaknesses as they have with this issue (i.e. Russia and China). We must move forward in building a better country and focus on what brings healing to our nation rather than tearing down institutions that we rely on to enforce laws and bring stability to the streets. Our officers don’t need less training, they need more and better training.

We are Americans with one of the most diverse countries in the world. We have been and must remain a beacon of hope, diversity, and reconciliation for the rest of the world.

I urge our politicians and law enforcement leadership to consider the following recommendations:

Joseph Assad is a former Operations Officer with the CIA with extensive counterterrorism and counterintelligence field experience. As a former U.S. Government official, Mr. Assad has worked on some of the most complex and protracted international security issues in the world. He is currently an international security consultant and CEO of IntelTech, LLC.