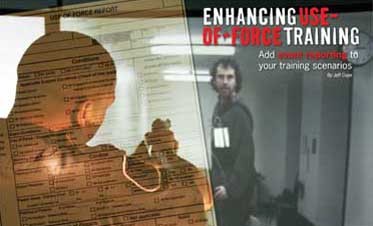 Law enforcement officers need use-of-force training to deal with the multitude of dangerous circumstances they may face on a daily basis. Typically, recruits in the academy and active-duty police officers train in the use of a variety of weaponless control, disarming and searching techniques. They train in the use of chemical agents, batons, electrical devices and deadly weapons. In advanced training sessions, they refine their skills in searching and handcuffing suspects, retaining their firearm when a suspect grabs it and many other life-saving exercises. Officers train via scenarios or simulations on whether to shoot or not shoot. They spend hours on the shooting range and in shoot houses to master firing their duty weapon. They train to punch, kick and restrain suspects, and to do so using only an objectively reasonable1 degree of force.

What, then, could possibly remain missing from law enforcement s use-of-force training? Here s a hint: Do the duties of an officer involved in a use-of-force incident end with the cessation of hostilities?

No. When officers use force in the line of duty, they must be able to document the circumstances. The general public, media, litigators and police administrators expect officers to recount each and every force application with clarity.

A general assumption persists in law enforcement that officers required to use force will know how to write a factual, accurate, clear, concise, complete and timely2 use-of-force report. Agencies often assume the academy has trained officers how to write reports, and they consider a use-of-force report just another police report. Unfortunately, once the recruit has left the academy, little is done to equip the officer for how to write an accurate report describing what occurred before, during and after the use of force.

So, how can police administrators and trainers effectively prepare their officers to be able to recall a peak stress event that is typically tense, uncertain and rapidly evolving? It s well known that officers revert to their training during these peak stress events. Effective trainers rely on actual incidents to create training that replicates real-world events so officers can learn from the apparent successes or mistakes. This type of training is outstanding in that it allows officers to safely develop skills under controlled circumstances that might prove life saving during the very next vehicle stop.

Now let s make this realistic training even better by adopting a new concept to take training to the next step.

Add an Event-Reporting Component
Consider a typical scenario-based firearms qualification course. The instructor gives an officer a scenario in which the officer must visualize responding to a residence for a domestic-violence call. The instructor provides the officer with information that the reporting party had heard screams coming from within a room and heard the victim yelling at the suspect to put the gun down. Current teaching has the officer enter the simulated room and react to whatever they see confronting them, such as a target of a hostage, an armed suspect, etc. The expected outcome of this type of training situation is for the officer to exit the room in one piece and, hopefully, disarm or shoot the bad guy and save the victim. This training is generally accepted as outstanding if the officer hits the target without getting shot and saves the victim.

While this training is better than some, it s missing a major component of realism that faces any officer involved in an actual incident. Take this training a step further: Train the officer to complete the entire event by making a written or verbal report. In the aftermath of real situations, officers make a statement to some investigating entity or write a report that documents what the officer knew going into the confrontation, what the officer faced upon entering the location, what actions the officer took and, most importantly, the justification for the actions taken. We expect officers to be able to accurately recount a real on- or off-duty situation, but we don t do a good job of training them to perform accordingly.

Of course, the immediate question is, Won t this take too much time during training? Writing the report may indeed consume time you don t have. If that s a valid concern, rather than require the officer to write the report, have the officer provide a verbal account to the trainer running the scenario or to an assistant acting as a supervisor. Make sure you have the officer recount the thought process for their actions because the mindset is very important in use-of-force incidents. Another option: Have the officer audiotape or videotape their recollections and turn it in for review.

Script the event before putting it into practice so that all participants will gain the same training experience. Prepare a checklist of typical questions asked by investigators during these types of incidents and responses an officer might make. The acting supervisor can check off correct responses and also note those not checked, indicating where the officer may need additional remediation in the deadly-force training scenario.

You can use this same concept for arrest-and-control training. The expected outcome for this type of training event is for the officer to react with the appropriate law enforcement tactics and weapon systems, to overcome the resistance of the suspect, to prevent the suspect s escape and to take the suspect into custody using objectively reasonable force. Like the firearms scenario, you can utilize a verbal report if time is an issue. Just make sure the officer goes over the steps taken to overcome the resistance and the justification for making the arrest. Have an assistant instructor play the role of a supervisor so the trainee has a live person to report to. Remember: Script the training event beforehand to ensure all participants receive the same training benefit.

Include Appropriate Laws & Policies
The type of strategy the agency selects for training will determine what policies the officer should be able to refer to when recounting the event.

If the agency trains officers in a scenario that requires deadly force, part of the expected accounting should include factors outlined in the U.S. Supreme Court decision Tennessee v. Garner3. In the Garner decision, the Court held a Tennessee statute unconstitutional insofar as it authorized the use of deadly force against an apparently unarmed, non-dangerous fleeing suspect: [S]uch force may not be used unless necessary to prevent the escape and the officer has probable cause to believe that the suspect poses a significant threat of death or serious physical injury to the officer or others. 5 The Court established the following standard of care for an officer using deadly force to capture a fleeing suspect:

Life-threatening escape: where the officer has probable cause to believe that the subject poses a threat of serious physical harm, either to the officer or others ;

Life-threatening felony: if the subject threatens the officer with a weapon or there is probable cause to believe that he has committed a crime involving the infliction of serious bodily harm ;

Give warning where feasible: the court imposes a constitutional requirement that some warning be given prior to the use of deadly force where feasible Halt, police! Stop or I ll shoot! ; and

If necessary to prevent escape: in order for deadly force to be constitutionally permissible, there must be probable cause to believe that the use of deadly force is reasonably necessary. 5

Officers should also be able to recall and explain any state law or department policy that applies to the situation. None of these needs to be verbatim, but the officer must be able to supply their reasoning and reliance on those laws or policies that affected their decisions during the training encounter.

If the training involves something other than the use of deadly force, officers should include some of the rationale mandated by Graham v. Connor. In the Graham decision, the Court told law enforcement that, all claims that law enforcement officials have used excessive force deadly or not in the course of an arrest, investigatory stop or other seizure of a free citizen are properly analyzed under the Fourth Amendment s objectively reasonable standard, rather than under a substantive due process standard. 6

The Court found in part that the reasonableness inquiry is whether the officers actions are objectively reasonable in light of the facts and circumstances confronting them, without regard to their underlying intent or motivation. The Court indicated uses of force should be looked at, and that one must consider the totality of circumstances to justify that particular sort of seizure.

The Court also stated that the reasonableness of a particular use of force must be judged from the perspective of a reasonable officer on scene, rather than with 20/20 vision of hindsight. The Court went on to state, the calculus of reasonableness must embody allowance for the fact that police officers are often forced to make split-second judgments in circumstances that are tense, uncertain, and rapidly evolving about the amount of force that is necessary in a particular situation. 7

In Summary
By adding this component of training requiring an officer to give a verbal account or write a proper report agencies emulate what they expect officers to do in their regular everyday duties. Replicating reality should enhance an officer s learning of proper procedures as well as increase recollection and retention of the peak stress facts the officer experienced while in the controlled environment. Officers will become equipped with the ability to apply those lessons when presented with a real-life situation.