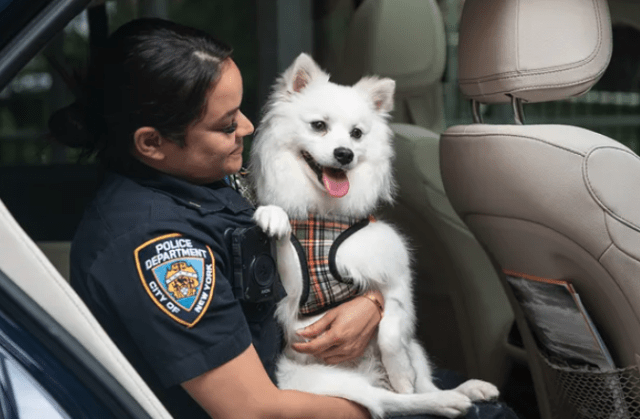 Officer Aruna Maharaj holds Snow, who was removed from a hot car in June. (ASPCA)

NEW YORK – An American Eskimo canine that had been abandoned inside a hot vehicle in New York City in June for as long as 24 hours now has a new home. One of the police officers who rescued the furry pup took him into her heart and eventually into her home.

An official from the American Society for the Prevention of Cruelty to Animals (ASPCA) told Fox News Digital that officers of the New York Police Department rescued the fluffy white American Eskimo dog whose name is now Snow before bringing him to an ASPCA Animal Recovery Center on the Upper East Side of Manhattan.

The center provided Snow with medical care and behavioral treatment until he was ready for adoption, according to the news outlet.

Last month, NYPD tweeted about the rescue as it occurred. The agency said officers responded to calls from “caring New Yorkers” who notified them about a dog trapped in a hot, locked vehicle in the heat of the summer.

Police discovered the car was off, the windows were closed and the distressed pup was locked inside, according to the NYPD 19th Precinct’s tweet.

Although the department said the dog was locked inside the car for two hours, ASPCA later learned the dog had been abandoned inside the vehicle for at least 24 hours.

Hot car, hot dog rescue—thanks to caring NYers who saw this pup locked in a car for over 2 hours & called 911!

Our cops responded discovering the car off, windows shut & distressed dog. They broke the window, got pup out & off to a vet for care. Criminal investigation continues. pic.twitter.com/B5MdVT6UUe

Responding officers rescued the distressed pup by breaking one of the car’s windows and then brought the canine to the ASPCA for treatment.

A criminal investigation was underway at that time, according to the June 18 social media post, Fox reported.

NYC temperatures on the day the dog was rescued were in the mid-80s, according to police. The precinct said that on an 85-degree day, it only takes 10 minutes for the inside of a car to reach a deadly 102 degrees.

This sweet American Eskimo canine was trapped in a hot car in Manhattan for approximately 24 hours. It took the pup a month to recover and to be available for adoption. (ASPCA)

NYPD reminded the public in a social media post that it’s unlawful to leave “an animal unattended in a car under these dangerous conditions — thankfully the pup was rescued & is being cared for.”

During Snow’s month-long recovery, Officer Aruna Maharaj remained in touch with ASPCA. She was one of the rescuers, a media spokesperson for the center told Fox News Digital.

This rescued dog named Snow has now been adopted. The officer who adopted the pet “knew Snow was special.” (ASPCA)

“From the moment Officer Maharaj was involved in this case, she knew Snow was special,” the ASPCA official told Fox.

Although the officer was not looking to adopt a pet, when police rescued Snow from the hot car, she instantly fell in love, according to an ASPCA spokesperson.

“She immediately brought him into her car with the air conditioner blasting, where he sat on her lap, licked her face and wouldn’t move from her company,” the spokesperson added.

Snow’s adoption was delayed for several weeks since he needed to receive medical care and behavioral care, according to the center. Once he was cleared the adoption took place.

This pup will never be neglected again!

A month ago, this sweet doggo was rescued after his owner left him in his hot locked car for hours; yesterday, one of it’s rescuers, Officer Maharaj, adopted him! Thank you @ASPCA for taking such good care of this lucky pup! pic.twitter.com/F3dbH8TmV1

Maharaj brought Snow to her home, where he now enjoys a large backyard and walks to a nearby park, according to an emailed statement from ASPCA.

The rescued canine is reportedly adjusting well to his new family and to having a cat sibling, Fox reported.

This pup rescued by officers with the NYPD is now enjoying himself again. (ASPCA)

NYPD did not offer further details on the case. The adopting officer was unavailable for comment, according to the department.