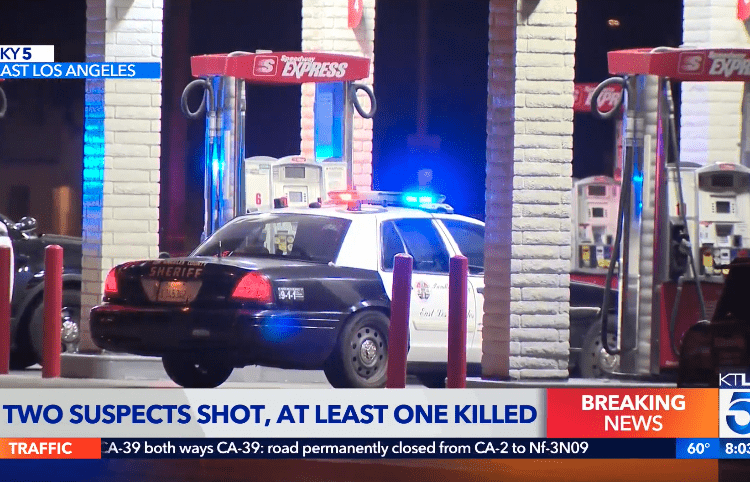 LOS ANGELES — A deputy of the Los Angeles County Sheriff’s Department was stabbed in the face during an altercation with two suspects, which ultimately led to a fatal shooting in the East Los Angeles area Friday morning.

The shooting occurred just prior to 4 a.m. at the Speedway Express gas station bordering East Los Angeles and Commerce in the 5700 block of Whittier Boulevard, KTLA reported.

The sheriff’s department responded to reports of a someone using a gas pump while lighting objects on fire at the station.

A deputy arrived on scene and found an adult male standing behind an SUV near the market at the gas station, Lt. Derrick Alfred said.

The deputy ordered the man to walk backwards toward him. As the suspect approached the deputy, without provocation, he turned and attacked, Alfred said.

The fight went to the ground and as the deputy was on his back a woman exited the parked Chevy Tahoe and ran towards the brawl with a sharp object, possibly a knife, KTLA reported.

The woman then reached over the male suspect and stabbed the deputy in the face, Alfred said.

“At that point, the deputy was able to retrieve his firearm. He fired two to three rounds. He struck both the male and the female,” Alfred said.

The male suspect was transported to a nearby hospital where he is listed in critical condition, according to the lieutenant.

The female suspect “was pronounced dead at the scene,” Alfred said.

As the investigation was getting underway, neither of the suspects were publicly identified.

The deputy was treated at a local hospital and has been released. He was subsequently transported back to the sheriff’s department for an interview, said Alfred.

At the preliminary stage of the investigation, LASD said they have “no idea” what the suspects were up to and it was unclear exactly what objects were being set on fire and why they chose to do it at the gas station.